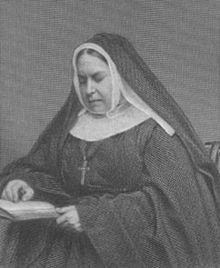 Gracious God, who led your servant Harriet Monsell through grief to a new vocation; grant that we, inspired by her example, may grow in the life of prayer and the work of service so that in sorrow or joy, your presence may increase among us and our lives reveal the mind of Jesus Christ, to whom, with you and the Holy Spirit be honor and glory, now and forever. Amen.

Harriet Monsell (1811 – 25 March 1883) founded the Community of St John Baptist, an order of Augustinian nuns in the Church of England dedicated to social service, which by her death had expanded to numerous houses, including in India and the Americas. She was born Harriet O'Brien, in 1811, to one of Ireland's oldest Anglo-Irish families. Harriet married Charles Monsell in 1839 while he was studying and receiving medical treatment at the University of Dublin, and they moved to Oxford the following year to complete his studies. He was later ordained, but, due to his continued delicate health, much of their later married life was spent in Europe, including Naples. After her husband's death in 1850, she began working in Clewer near Windsor among former prostitutes and unwed mothers at a House of Mercy. Soon, Harriet Monsell professed religious vows with two other women. Initially they were called the Sisters of Mercy, but later changed their name to reflect their inspiration from John the Baptist's call to penitence. She thus became Mother Superior of the Community of St John Baptist, established on 30 November 1852, and one of the first Anglican religious orders since the Reformation. Because of their affiliation with the town of Clewer they are commonly called the 'Clewer Sisters'. The women lived according to a rule attributed to St Augustine of Hippo. During the new order's first five years, it expanded from assisting about thirty marginalised women to dedicating a building to serve about eighty. As the Community of St John Baptist, guided by Mother Harriet's energy, extensive correspondence and humour, the nuns extended their original mission to running about forty institutions, including mission houses in various parishes, as well as orphanages, schools and hospitals.

Mother Harriet retired to Folkestone in 1875 for health reasons, although she was occasionally able to visit the communities she founded. She died on the morning of 26 March 1883, which was Easter Sunday that year. *

* The Lectionary, via Wikipedia and Project Canterbury, http://www.satucket.com/lectionary/harriet_monsell.html