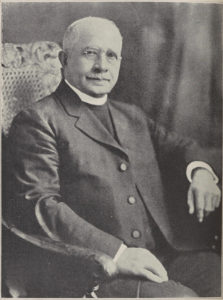 O God, the font of resurrected life, draw us into the wilderness and speak tenderly to us, so that we might love and worship you as your servant James Solomon Russell did, in assurance of the saving grace of Jesus Christ, who lives and reigns with you and the Holy Spirit, one God, for ever and ever. Amen.

James Russell was born on the Hendrick plantation in Mecklenburg County. After the Civil War, his family began sharecropping in Palmer Springs, Virginia. James began attending a local school whose schoolmaster allowed tuition to be paid in labor and farm products, and the schoolmaster and superintendent encouraged him to continue his education.

He thus was admitted to the Hampton Normal and Agricultural Institute in 1874. Financial constraints required that he support himself, and so he began teaching near home, and also worked when the college was not in session. Around this time Russell decided to become a member of the Episcopal Church. He secured admission to the newly formed Bishop Payne Divinity School in 1878.

Bishop Whittle ordained Russell a deacon on March 9, 1882 and sent him as a missionary back to Mecklenburg County. He worked in Lawrenceville, Virginia, and the diocese authorized funds to build a church for his parishioners, as well as a horse to assist on his missionary travels. He was ordained as a priest in 1887.

In January 1883, Russell and his wife began teaching African Americans in a room at the tiny new church. This expanded and eventually became Saint Paul Normal and Industrial School. Due to his enthusiasm and aggressive fund-raising, it expanded its enrollment and curriculum. In 1893, Rev. Russell was named Archdeacon of the newly formed Diocese of Southern Virginia and charged with working among African Americans. As a result of his ministry, the number of African American churches in his diocese increased from none to 37, with more than 2000 communicants. He later became the first African American to be named to the Board of Missions of the Episcopal Church, and served in that capacity from 1923-1931. In 1917, Russell was elected as Suffragan Bishop of Arkansas, but declined the honor in order to continue his work at the school, as he did when notified of his election as Suffragan Bishop of North Carolina.

James Solomon Russell died at the President's house in Lawrenceville on March 28, 1935 after an extended illness. He was buried at the school cemetery. Archdeacon Russell's autobiography, Adventure in Faith, was published in 1935. The historically black college developed financial problems after the successes of the American Civil Rights Movement, and it closed in 2013. *

* The Lectionary, via Wikipedia and the Episcopal Archives, http://www.satucket.com/lectionary/James_Russell.htm