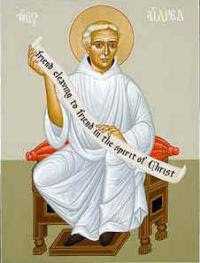 January 12 - Feast of St. Aelred of Rievaulx, Abbot and Theologian
Evening Prayer and Study of Aelred - Tonight via Zoom

Join us tonight - Wednesday night, January 12, for Evening Prayer and our Study of Aelred Class.

Aelred of Rievaulx, Abbot and Theologian, 1167

Grant to your people, Almighty God, a spirit of mutual affection, that following the example of your servant Aelred, we might know the love of Christ in loving one another, and might rejoice in the gift of your eternal goodness; through the same Jesus Christ our Lord, who lives and reigns with you and the Holy Spirit, one God, now and for ever. Amen.

Aelred was born in 1109 at Durham, and was sent to the Scottish court for an education that would ensure his future as a noble and courtier. He succeeded, to the extent of being made Master of the Household of the King of Scotland. Nevertheless, he found success at the court of an earthly king unsatisfying, and at the age of 24 he entered the Cistercian monastery at Rievaulx in Yorkshire. Bernard of Clairvaux encouraged him to write his first work, The Mirror of Charity, which deals with seeking to follow the example of Christ in all things. In 1147 he became abbot of Rievaulx, a post which he held until his death of kidney disease twenty years later at the age of 57.

His most famous work is called Spiritual Friendship (both it and the Mirror have been published in English by the Cistercian Press).

When Jesus was told that his family was waiting to see him, he replied, "All who do the will of my Father are my family." From this, some Christians have drawn the conclusion that the only kind of love permissible to a Christian is Charity -- that is: (a) the universal benevolence that wills the good of all persons, and (b) the bond that unites the Christian with Christ and through Christ with all other Christians. Note that Universal Benevolence is extended equally to all persons (we are to love Jones because God made him), and that the bond of Christian Unity unites us equally with all our fellow Christians who are in a state of grace (we are to love Jones because Christ dwells in him). Neither leaves any room for particular friendships, for liking Jones more than Smith because Jones shares our interest in hockey, or because Jones and we like the same sort of jokes, or come from the same part of the country and have similar childhood memories, or because Jones is an easy-going type and it is easy to relax and feel comfortable around him, or because Jones and we have a special bond of friendship, loyalty, and trust. Particular friendships are out!

Some who do not think that every Christian must renounce particular friendships believe that every monastic must do so. In many religious houses, where the monks or nuns walk two by two into chapel or the dining hall or while pacing about during the daily hour of recreation, the superior will make a point of constantly shifting partners, lest anyone form a liking for one partner more than another. (This does not apply just to friends. It is sometimes held that no monk ought to allow himself any preferences in food or drink.) Against this view, Aelred wrote that it is compatible with the highest degree of Christian perfection to take special pleasure in the company of particular friends. He point out that we are told that Jesus loved John, and Mary, and Martha, and Lazarus, and that this probably means that he found their company congenial. *

* The Lectionary, James Kiefer, http://www.satucket.com/lectionary/Aelred.htm
Posted by Whit+ at 8:04 AM