Marcella of Rome, Monastic and Scholar, 410 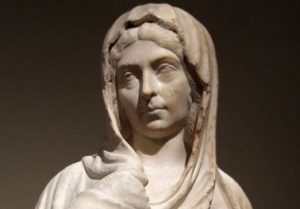 O God, who satisfies the longing soul and fills the hungry with good things: Grant that we, like your servant Marcella, may hunger and thirst after you above the vain pomp and glory of the world, and delight in your word above all manner of riches; through Jesus Christ our Lord, who lives and reigns with you and the Holy Spirit, one God, now and for ever. Amen.

Marcella (325–410) is known primarily for her role in the founding of monasticism. After the death of her husband, she commenced a life of abstinence and many other women in Rome at the time followed suit.

Growing up in Rome, Marcella was influenced by her pious mother, Albina, an educated woman of wealth and benevolence.

Marcella's wealth and beauty placed her at the center of fashionable Roman society. She married young, to a wealthy aristocrat, but seven months later he died. After her husband's early death, Marcella decided to devote the rest of her life to charity, prayer, and mortification of the flesh and was convinced that God was directing her to a life of poverty and service. She left behind her fashionable dresses for a coarse brown garment and abandoned her usual extravagant hair styling and makeup. Along with other women, Marcella formed a community known as the brown dress society, spending their time praying, singing, reading the Bible, and serving the needy. Her palatial home became a refuge for weary pilgrims and for the poor.

Summoned by Pope Damasus I (who arranged lodging at Marcella's hospitality house), Jerome arrived in Rome in 382. It was an exhilarating time for Marcella, a woman of letters who had immersed herself in both Greek and Hebrew, to be entertaining one of the great minds of the age. Jerome spent the next three years in what he called her "domestic church," translating the Bible into Latin. She learned under his teaching even as she critiqued his translation. He spoke and wrote of her Christian devotion and scholarship Indeed, his admiration of Marcella was unbounded, not only for her intellectual acumen but also for her deference to men who might be threatened by her vast store of knowledge.

Most of what we know about Marcella is from the letters of Jerome, most famously his letter 127 to Principia. It was written on the occasion of Marcella's death, paying tribute to her life and consoling her beloved student. *

* The Lectionary, Wikipedia, http://satucket.com/lectionary/Marcella_Rome.html
Posted by Whit+ at 7:13 AM