Join us tonight,  Wednesday night, January 5, for Zoom Evening Prayer and our Desert Mothers Video Class. Evening Prayer begins at 5:30 p.m. and our class follows. We will remember "Ammas" Sarah, Theodora, and Syncletica, whose feast is today.

More information follows along with Icons of each of these Holy Women.

The Collect:
Fix our hearts on You, O God, in pure devotion, that aided by the example of your servants Sarah, Theodora, and Syncletica, the vain pursuits of this world may have no hold upon us, and that by the consuming fire of your Spirit, we may be changed into the image and likeness of your Son, Jesus Christ our Lord; to whom with you and the same Spirit be all honor and glory, now and for ever. Amen.
The Desert Mothers were female Christian ascetics living in the desert of Egypt, Palestine, and Syria in the 4th and 5th centuries AD. They typically lived in the monastic communities that began forming during that time, though sometimes they lived as hermits. Other women from that era who influenced the early ascetic or monastic tradition while living outside the desert are also described as Desert Mothers.
The Desert Fathers are much more well known because most of the early lives of the saints "were written by men for a male monastic audience" — the occasional stories about the Desert Mothers come from the early Desert Fathers and their biographers. Many desert women had leadership roles within the Christian community. There are several chapters dedicated to the Desert Mothers in the Lausiac History by Palladius, who mentions 2,975 women living in the desert. Other sources include the various stories told over the years about the lives of saints of that era, traditionally called vitae ("life"). The lives of twelve female desert saints are described in Book I of Vitae Patrum (Lives of the Fathers).
The Desert Mothers were known as ammas ("spiritual mothers"), comparable to the Desert Fathers (abbas), due to the respect they earned as spiritual teachers and directors. One of the most well known Desert Mothers was Amma Syncletica of Alexandria, who had twenty-seven sayings attributed to her in the Apophthegmata Patrum, or Sayings of the Desert Fathers. Two other ammas, Theodora of Alexandria and Amma Sarah of the Desert, also had sayings in that book.
According to written accounts, Amma Syncletica might have been born around AD 270 (since she died about AD 350 and is said to have lived to her eighties), to wealthy parents in Alexandria and was well educated, including an early study of the writings of Desert Father Evagrius Ponticus. After the death of her parents, she sold everything she had and gave the money to the poor. Moving outside the city with her blind sister, she lived as a hermit among the tombs outside of Alexandria. Gradually a community of women ascetics grew up around her, who she served as their spiritual mother. Even though she was an ascetic and hermit, Syncletica taught moderation, and that asceticism was not an end in itself.
Theodora of Alexandria was the amma of a monastic community of women near Alexandria. Prior to that, she had fled to the desert disguised as a man and joined a community of monks. She was sought out by many of the Desert Fathers for advice—reportedly Bishop Theophilus of Alexandria came to her for counsel.
Sarah of the Desert's sayings indicate that she was a hermit living by a river for sixty years. Her sharp replies to some of the old men who challenged her show a distinctly strong personality. According to one story, two male anchorites visited her in the desert and decided, "Let's humiliate this old woman." They said to her, "Be careful not to become conceited thinking to yourself: "Look how anchorites are coming to see me, a mere woman." She replied, "According to nature I am a woman, but not according to my thoughts." *
* Wikipedia, via The Lectionary, http://www.satucket.com/lectionary/desert_mothers.html 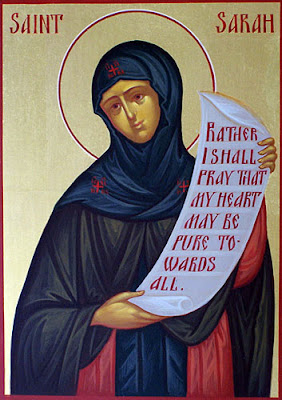 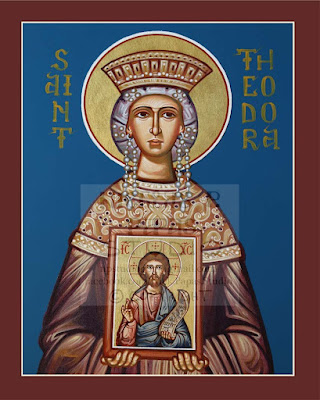 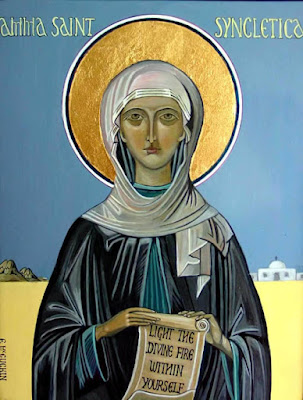