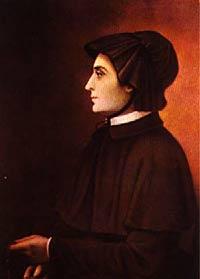 Give us grace, O God, to love you in all things and above all things, that following the example of your servant Elizabeth Ann Seton we might express our love for you in the service of others. Through Jesus Christ our Lord, who lives and reigns with you and the Holy Spirit, one God, in glory everlasting. Amen.

Seton was born on August 28, 1774 to Richard Bayley of New York City. She was raised in the Episcopal Church. Her mother, daughter of an Episcopal priest, died when Elizabeth was three. At the age of nineteen, she married William Magee Seton, a wealthy businessman. Five children were born to the marriage.

Her husband's business lost several ships at sea and the family ended up bankrupt. Soon after, her husband became ill and his doctors sent him to Italy for the warmer climate, with Elizabeth Seton accompanying him. In Italy, they were held in quarantine, during which time her husband died. She spent time with a wealthy family where she was exposed to Catholicism. Two years later she converted to Roman Catholicism, on March 14, 1805 and was received into the Church by the first bishop of Baltimore, John Carroll.

To support her children, she started a school in Baltimore, but it failed due to the anti-Catholic bigotry of the day. In 1809, after some trying and difficult years, Elizabeth moved to Emmitsburg, Maryland, where a year later she established Saint Joseph's Academy and Free School, a school dedicated to the education of Catholic girls, at the invitation of Samuel Sutherland Cooper.

Eventually, Elizabeth was able to establish a religious community in Emmitsburg, Maryland dedicated to the care of the children of the poor. It was the first religious community of apostolic women founded in the United States. The order was called the Sisters of Charity of St. Joseph.

The remainder of Elizabeth's life was spent in leading and developing the new order, which expanded to include the Sulpician priests of Baltimore. Today, six independent religious communities trace their roots to the humble beginnings of the Sisters of Charity in Emmitsburg, Maryland. *

* Wikipedia, via The Lectionary, http://www.satucket.com/lectionary/elizabeth_seton.htm