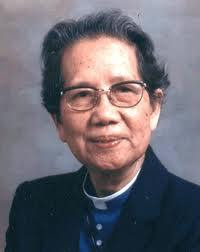 Almighty God, who pours out your Spirit upon your sons and daughters: Grant that we, following the example of your servant Florence Li Tim-Oi, chosen priest in your church, may with faithfulness, patience, and tenacity proclaim your holy gospel to all the nations, through Jesus Christ our Lord, who lives and reigns with you and the Holy Spirit, one God, in glory everlasting. Amen.

Florence Li, born in Hong Kong, attended Canton Union Theological College to receive her theological education before returning to Hong Kong in 1938. After working for two years in All Saints Church, in Kowloon, helping refugees in Hong Kong who fled mainland China in the midst of the Second Sino-Japanese War, Li was sent by Bishop Ronald Hall to help with refugees in Macau. Six months into her new post, she returned to Hong Kong to be ordained as a deaconess on 22 May 1941 by Bishop Hall.

The Japanese occupation of Hong Kong and of parts of China had made it impossible for Anglican priests to get to neutral Macau, where there was no resident Anglican priest. In January 1944, Li traveled through Japanese-occupied territory to the small town of Hsinxing, as yet unoccupied by the Japanese, to meet with Bishop Hall; from there they proceeded to Shaoqing where he regularized her administration of the sacraments by ordaining her as a priest on 25 January 1944. It was to be 30 years before any Anglican church regularized the ordination of women, so unsurprisingly after the war there were protests concerning her ordination; to avoid further controversy she resigned her license, though not her priest's orders.

She later moved to Canada where she was eventually able to exercise her role as a priest. *

* The Lectionary via Wikipedia, http://www.satucket.com/lectionary/Li_Tim-Oi.htm