Agnes and Cecilia of Rome

Almighty and everlasting God, who chooses those whom the world deems powerless to put the powerful to shame, grant us so to cherish the memory of your youthful martyrs Agnes and Cecilia, that we might share their pure and steadfast faith in you; through Jesus Christ our Lord, who lives and reigns with you and the Holy Spirit, one God for ever and ever. Amen.

Agnes is a Christian martyr who died at Rome around 304 in the persecution of Diocletian: the last and fiercest of the persecutions of Christianity by the Roman emperors. The anniversary of her martyrdom is observed on 21 January. Her name means “pure” in Greek and “lamb” in Latin. She is said to have been only about twelve or thirteen when she died, and the remains preserved in St Agnes' Church in Rome are in agreement with this. It is said that her execution shocked many Romans and helped bring an end to the persecutions.  Agnes is regarded as the patron of young unmarried girls, and there is a folk-belief that a girl who goes to bed supperless on the eve of St Agnes's Day will dream that night about her husband-to-be. 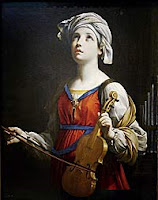 Cecilia is the patron saint of musicians and Church music because as she was dying she sang to God. It was long supposed that she was a noble lady of Rome who, with her husband Valerian, his brother Tiburtius, and a Roman soldier Maximus, suffered martyrdom, c. 230, under the Emperor Alexander Severus. It is said of the martyrdom of Cecilia that the officials attempted to kill her by boiling her alive. However, the attempt failed, and she was to be beheaded. The executioner attempted to decapitate her three times unsuccessfully, at which time he fled. Cecilia survived another three days before succumbing. In the last three days of her life, she opened her eyes, gazed at her family and friends who crowded around her cell, closed them, and never opened them again. The people by her cell knew immediately that she was to become a saint in heaven. *