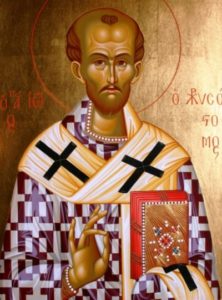 O God, who gave your servant John Chrysostom grace eloquently to proclaim your righteousness in the great congregation, and fearlessly to bear reproach for the honor of your Name: mercifully grant to all who proclaim your word such excellence in preaching, that all your people may be made partakers of the glory that shall be revealed; through Jesus Christ our Lord, who lives and reigns with you and the Holy Spirit, one God for ever and ever. Amen.

John was called "Chrysostom" ("Golden Mouth") because of his eloquence. He was a priest of Antioch, and an outstanding preacher. (Audiences were warned not to carry large sums of money when they went to hear him speak, since pickpockets found it very easy to rob his hearers -- they were too intent on his words to notice what was happening.) His sermons are mostly straightforward expositions of Holy Scripture (he has extensive commentaries on both Testaments, with special attention to the Epistles of Paul), and he emphasizes the literal meaning, whereas the style popular at Alexandria tended to read allegorical meanings into the text. He loved the city and people of Antioch, and they loved him. However, he became so famous that the Empress at Constantinople decided that she must have him for her court preacher, and she had him kidnapped and brought to Constantinople and there made bishop. This was a failure all around. His sermons against corruption in high places earned him powerful enemies (including the Empress), and he was sent into exile, where he died. Along with Athanasius of Alexandria, Basil the Great, and Gregory of Nazianzus, he is counted as one of the Four Great Eastern (or Greek) Doctors of the Ancient Church. The Four Great Western (or Latin) Doctors are Ambrose, Jerome, Augustine, and Gregory the Great. *