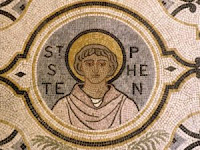 We give you thanks, O Lord of glory, for the example of the first martyr Stephen, who looked up to heaven and prayed for his persecutors to your Son Jesus Christ, who stands at your right hand; where he lives and reigns with you and the Holy Spirit, one God, in glory everlasting. Amen.

All that we know about Stephen the Protomartyr (that is, the first martyr of the Christian Church) is found in chapters 6 and 7 of the Book of Acts.

The early Christian congregations, like the Jewish synagogues, had a program of assistance for needy widows, and some of the Greek-speaking Jews in the Jerusalem congregation complained that their widows were being neglected. The apostles replied: "We cannot both preach and administer financial matters. Choose seven men from among yourselves, respected, Spirit-filled, and of sound judgement, and let them be in charge of the accounts, and we will devote ourselves to prayer and the ministry of the word." The people accordingly chose seven men, including Stephen, and the apostles laid their hands on them. They are traditionally considered to be the first deacons, although the Scriptures do not use the word to describe them. (The Scriptures do refer to officials called deacons in the local congregations, without being very specific about their duties; and a century or more later, we find the organized charities of each local congregation in the hands of its deacons.)

Stephen was an eloquent and fiery speaker, and a provocative one. (Some readers have speculated that some of his fellow Christians wanted to put him in charge of alms in the hope that he would administer more and talk less.) His blunt declarations that the Temple service was no longer the means by which penitent sinners should seek reconciliation with God enraged the Temple leaders, who caused him to be stoned to death. As he died, he said, "Lord, do not hold this sin against them." One of those who saw the stoning and approved of it was Saul (or Paul) of Tarsus, who took an active part in the general persecution of Christians that followed the death of Stephen, but who was later led to become a Christian himself.
We remember Stephen on December 26, the day after Christmas. *
Note: This year, St. Stephen’s Feast is transferred to today, because December 26 was The First Sunday after Christmas Day.

* The Lectionary, James Kiefer, http://www.satucket.com/lectionary/Stephen.htm
Posted by Whit+ at 6:43 AM