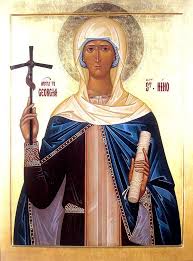 Almighty God, who called your servant Nino to be your apostle to the people of Georgia, to bring those wandering in darkness to the true light and knowledge of you; Grant us so to walk in that light, that we may come at last to the light of your everlasting day; through Jesus Christ our Lord, who lives and reigns with you and the Holy Spirit, one God, now and for ever. Amen.

According to most widely traditional accounts, she belonged to a Greek-speaking Roman family from Kolastra, Cappadocia, was a relative of Saint George, and came to Georgia (ancient Iberia) from Constantinople. Other sources claim she was from Rome, Jerusalem or Gaul (modern France). According to legend, she performed miraculous healings and converted the Georgian queen, Nana, and eventually the pagan king Mirian III of Iberia, who, lost in darkness and blinded on a hunting trip, found his way only after he prayed to "Nino’s God". Mirian declared Christianity the official religion (c. 327) and Nino continued her missionary activities among Georgians until her death.

Her tomb is still shown at the Bodbe Monastery in Kakheti, eastern Georgia. St. Nino has become one of the most venerated saints of the Georgian Orthodox Church and her attribute, a grapevine cross, is a symbol of Georgian Christianity.*

* Wikipedia, via The Lectionary, http://www.satucket.com/lectionary/Nino.html