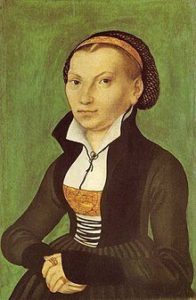 Almighty God, who called servant Katharina von Bora from a cloister to work for the reform of your church, grant that all of us may go wherever you call, and serve however you will, for your honor and glory and for the welfare of your whole church. All this we ask through Jesus Christ, our only mediator and advocate. Amen.

Katharina von Bora (January 29, 1499 – December 20, 1552), after her wedding Katharina Luther, was the wife of Martin Luther, German reformer and a seminal figure of the Protestant Reformation. Beyond what is found in the writings of Luther and some of his contemporaries, little is known about her. Despite this, Katharina is often considered one of the most important participants of the Reformation because of her role in helping to define Protestant family life and setting the tone for clergy marriages.

Katharina von Bora was the daughter to a family of Saxon petty nobility. Her father sent the five-year-old Katharina to the Benedictine cloister in Brehna in 1504 for education. After several years of religious life, Katharina became interested in the growing reform movement and grew dissatisfied with her life in the monastery. Conspiring with several other nuns to flee in secrecy, she contacted Luther and begged for his assistance. On Easter Eve, 4 April 1523, Luther sent Leonhard Köppe, a city councilman of Torgau and merchant who regularly delivered herring to the monastery. The nuns successfully escaped by hiding in Köppe's covered wagon among the fish barrels, and fled to Wittenberg.

Martin Luther, as well as many of his friends, were at first unsure of whether he should even be married. However, he eventually came to the conclusion that "his marriage would please his father, rile the pope, cause the angels to laugh, and the devils to weep." Martin Luther married Katharina on June 13, 1525.

Katharina immediately took on the task of administering and managing the Wittenburg monastery's vast holdings, breeding and selling cattle and running a brewery to provide for their family, the steady stream of students who boarded with them, and visitors seeking audiences with her husband.

The marriage of Katharina von Bora to Martin Luther was extremely important to the development of the Protestant Church, specifically in regards to its stance on marriage and the roles each spouse should concern themselves with. The way Luther described Katie’s actions and the names he gives her like “My Lord Katie” shows us that he really did feel strongly that she exhibited a great amount of control over her own life and decisions. It could even reasonably be argued that she maintained some influence in the actions of Martin Luther himself. In addition to her busy life tending to the lands and grounds of the monastery, Katharina bore six children.

When Martin Luther died in 1546, Katharina was left in difficult financial straits without Luther's salary. She remained in Wittenberg in poverty until 1552, when an outbreak of the Black Plague and a harvest failure forced her to leave the city once again. She fled to Torgau where she was thrown from her cart into a watery ditch near the city gates. For three months she went in and out of consciousness, before dying in Torgau on December 20, 1552, at the age of 53.*

*Wikipedia, via The Lectionary, http://www.satucket.com/lectionary/Katharina_von_Bora.html
Posted by Whit+ at 7:11 AM