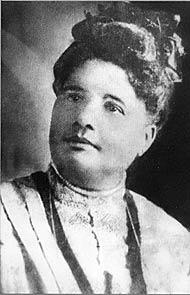 Merciful God, who raised up thy servant Frances Joseph Gaudet to be a champion of the oppressed: Grant that we, encouraged by her example, may advocate for all who are denied the fullness of life to which you have called all your children; through Jesus Christ our Lord, who lives and reigns with you and the Holy Spirit, one God, for ever and ever. Amen.

Frances Joseph-Gaudet (1861- December 1934), prison reform worker and educator, was born in a log cabin in Holmesville, Mississippi of African American and Native American descent. She was raised by her grandparents. Later she went to live with a brother in New Orleans where she attended school and Straight College. Widowed early, she dedicated her life to prison reform. Beginning in 1894 she held prayer meetings, wrote letters, delivered messages, and secured clothing for black prisoners, and later for white prisoners as well. Her dedication to prisoners and prison reform won her the respect of prison officials, city authorities, the governor, and the Prison Reform Association. A delegate to the Women’s Christian Temperance Union international convention in Edinburgh, Scotland, in 1900, she worked for the reform of young blacks arrested for misdemeanor or vagrancy. Joseph-Gaudet was the first woman to support juvenile offenders in Louisiana, and her efforts helped found the juvenile court. She eventually purchased a farm and founded the Gaudet Normal and Industrial School. The school, which eventually expanded to 105 acres and numerous buildings, also served as a boarding school for children with working mothers. Joseph-Gaudet served as principal of the school until 1921 when she donated the school to the Episcopal Church of Louisiana. Though the school closed in 1950, the Gaudet Episcopal Home opened in the same location four years later to serve African American children ages four to sixteen. The endowment fund currently supports St. Luke’s Community Center on North Dorgenois Street, where a hall honors Frances Joseph-Gaudet.*

* From the Episcopal Women's History Project, via The Lectionary, http://satucket.com/lectionary/F_Joseph-Gaudet.htm
Posted by Whit+ at 6:23 AM