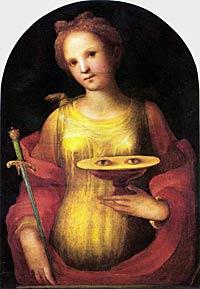 Loving God, for the salvation of all you gave Jesus Christ as light to a world in darkness: Illumine us, as you did your daughter Lucy, with the light of Christ, that by the merits of his passion, we may be led to eternal life; through the same Jesus Christ, who with you and the Holy Spirit lives and reigns, one God, for ever and ever. Amen.

The early Roman lists of martyrs commemorate Lucy, virgin and martyr, on 13 December, and her name, with that of Agatha, appears in the Roman Liturgy as an example of those who have gone before us, in whose company we join in giving thanks and praise to God. Aside from this, little is known of her, except that she lived in Syracuse in Sicily, and probably died around 304. Her name, which means "light," probably accounts for the story that her eyes were put out and her eyesight miraculously restored, and may be connected with the fact that her feast occurs near the time when (in the Northern Hemisphere) the nights are longest. In Sweden and elsewhere, the day is observed by having one of the daughters of the house dress in a white robe with a crown of lighted candles and go singing from room to room (presumably followed by an adult with a fire extinguisher) early in the morning when it is still dark to awaken the other family members and to offer them St. Lucy's Cakes and hot coffee.

Ember Wednesday (of the winter season) is defined as the Wednesday after Lucy's Day. (An equivalent definition would be: the Wednesday preceding the last Sunday before Christmas.) *

Note: Lucy is said to have had her eyes gouged out at her martyrdom, and so is often portrayed carrying them on a plate.