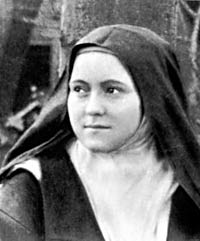 Gracious Father, who called your servant Therese to a life of fervent prayer, give to us the spirit of prayer and zeal for the ministry of the Gospel, that the love of Christ may be known throughout all the world; through the same Jesus Christ, our Lord. Amen.

Therese of Lisieux (2 January 1873 – 30 September 1897), was a French Catholic Discalced Carmelite nun who is widely venerated in modern times. She is popularly known as "The Little Flower of Jesus" or simply "The Little Flower".

Therese has been a highly influential model of sanctity for Catholics and for others because of the "simplicity and practicality of her approach to the spiritual life". Together with Francis of Assisi, she is one of the most popular saints in the history of the church.

Therese felt an early call to religious life, and in 1888 at the early age of 15, she became a nun and joined two of her elder sisters in the cloistered Carmelite community of Lisieux, Normandy. After nine years as a Carmelite religious, she died at aged 24, following a slow and painful fight against tuberculosis.

Therese is best known today for her spiritual memoir, L'histoire d'une âme (The Story of a Soul). It describes her "little way" of a simple life of prayer and small good deeds. It was published a year after her death and became immediately very popular, likely leading to her canonization in 1925.*

*Wikipedia, via The Lectionary, http://www.satucket.com/lectionary/therese_lisieux.html