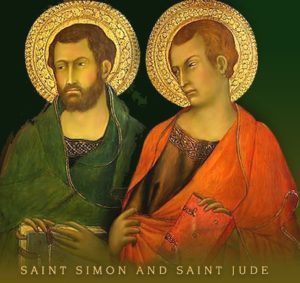 O God, we thank you for the glorious company of the apostles, and especially on this day for Simon and Jude; and we pray that, as they were faithful and zealous in their mission, so we may with ardent devotion make known the love and mercy of our Lord and Savior Jesus Christ; who lives and reigns with you and the Holy Spirit, one God, for ever and ever. Amen.

On the various New Testament lists of the Twelve Apostles (Matthew 10:2-4; Mark 3:16-19; Luke 6:14-16; Acts 1:13), the tenth and eleventh places are occupied by Simon the Zealot, also called Simon the "Cananean," the Aramaic word meaning "Zealot" and by Judas of James, also called Thaddaeus or Lebbaeus. "Judas" in New Testament contexts corresponds to "Judah" in Old Testament ones.

Some ancient Christian writers say that Simon and Jude went together as missionaries to Persia, and were martyred there. If this is true, it explains, to some extent, our lack of historical information on them and also why they are usually put together.

Simon is not mentioned by name in the New Testament except on these lists. Some modern writers have used his surname as the basis for conjectures associating him, and through him Jesus and all His original followers, with the Zealot movement described by Josephus, a Jewish independence movement devoted to assassination and violent insurrection. However, there were many movements that were called Zealot, not all alike, and Josephus tells us (Jewish War 4,3,9) that the movement he is describing did not arise until shortly before the destruction of the Temple in 70 AD.

Judas (often called Jude in English, but the Greek has Judas) is variously named, but this is not surprising. Before the Crucifixion, there would be a need to distinguish him among the apostles from Judas Iscariot, and after the Crucifixion there would be an additional reason for being emphatic about the distinction.

After the Last Supper it was Jude who asked Our Lord why he chose to reveal Himself only to the disciples. He received the reply: "If anyone loves me, he will keep my word, and my Father will love him, and we will come to him and make our home with him." (John 14:22f)

The ninth name on the lists of Apostles is that of James (the son) of Alphaeus. Although most modern translations render "Judas of James" as "Judas the son of James," there has been a tendency to understand it as "Judas the brother of James" and to assume that these two apostles were brothers. This assumption in turn leads to an identification of the two with the "brothers of the Lord" of the same name. The difficulty with this is that the brothers (at least some of them) did not believe in Jesus until after the Resurrection, and therefore could not have been part of the Twelve.

The New Testament Epistle of Jude was written by "Judas the brother of James," which could refer to either Jude. In any case, we commemorate on this day (1) Simon the Zealot, one of the original Twelve; (2) Judas of James (also called Thaddaeus or Lebbaeus), also one of the original Twelve; and (3) Jude (or Judas) the brother of James and author of the Epistle, without settling the question of whether (2) and (3) are the same person.

The Epistle of Jude is a brief document addressed to the Church, and warns against corrupt influences that have crept in. It has some obscure and baffling references to old Jewish traditions, but it includes a memorable exhortation to "contend for the faith once delivered to the saints," and an even more memorable closing:

Now unto him that is able to keep you from falling, and to present you faultless before the presence of his glory with exceeding great joy, to the only wise God, or Savior, be glory and majesty, dominion and power, both now and ever. Amen.*