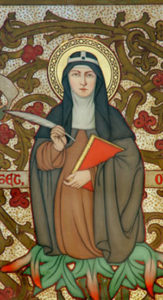 O God, who beholds all things and whose judgment is always mercy; by the example of your servant Birgitta of Sweden, give to us in this life the vision of your kingdom, where Jesus Christ is all and in all, that we may pattern our earthly lives on things heavenly, where our lives are hidden with Christ in you; who with him and the Holy Spirit live and reign for ever and ever. Amen.

Brigitta (Bridget) of Sweden (1303 – 23 July 1373); born as Birgitta Birgersdotter, was a mystic and saint, and founder of the Bridgettines nuns and monks.

The most celebrated saint of Sweden was married at the age of 14 to Ulf Gudmarsson, to whom she bore eight children. In 1344 Ulf died, after which Birgitta devoted herself wholly to a life of prayer and caring for the poor and the sick. It was about this time that she developed the idea of establishing the religious community which was to become the Order of the Most Holy Savior, or the Brigittines. One distinctive feature of the pre-Reformation houses of the Order was that they were double monasteries, with both men and women forming a joint community, though with separate cloisters. They were to live in poor convents and to give all surplus income to the poor. However, they were allowed to have as many books as they pleased.

At the age of ten, Bridget had a vision of Jesus hanging upon the cross. She was so impressed that from that moment the Passion of Christ became the center of her spiritual life. The revelations she had received since childhood became more frequent, and her records of these Revelationes coelestes ("Celestial revelations") obtained a great vogue during the Middle Ages.These revelations made Bridget something of a celebrity to some and a controversial figure to others.

In 1350, a Jubilee Year, Birgitta braved a plague-stricken Europe to make a pilgrimage to Rome accompanied by her daughter Catherine, and a small party of priests and disciples. This was done partly to obtain from the Pope the authorization of the new Order and partly in pursuance of her self-imposed mission to elevate the moral tone of the age. Birgitta made herself universally beloved in Rome by her kindness and good works. Save for occasional pilgrimages, including one to Jerusalem in 1373, she remained in Rome until her death on 23 July 1373, urging ecclesiastical reform and an end to the Avignon schism.*

*Wikipedia, via The Lectionary, http://satucket.com/lectionary/birgitta_sweden.html