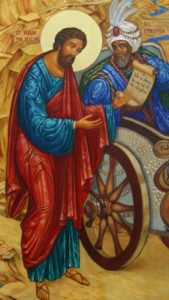 O God, who has made of one blood all the peoples of the earth and sent your Son to preach peace to those who are far off and to those who are near: Grant that we, following the example of your servant Philip, may bring your Word to those who seek you, for the glory of your Name; through Jesus Christ our Lord, who lives and reigns with you in the unity of the Holy Spirit, one God, now and for ever. Amen.

In the sixth chapter of Acts, we read that the Apostles commissioned seven men in the congregation at Jerusalem to supervise the church's ministry to the needs of its widows and other poor. (This is generally considered to be the beginning of the office of Deacon in the Church, although the Scriptures do not use this term in referring to the original seven men.) Two of these have gained lasting fame. One was Stephen, who became the Church's first martyr. The other was Philip, whose story we find in Acts 8:5-40; 21:8-9. After the death of Stephen, there was a general persecution of the Church at Jerusalem, and many Christians fled to escape it. Philip fled to Samaria, where he preached the Gospel to the Samaritans, a group who had split off from the Jewish people about six centuries earlier, had intermarried with other peoples, and were considered outsiders by most Jews. They received the message with eagerness, and soon Peter and John came to Samaria to bless the new converts.

After this, Philip was sent by God to walk along the road from Jerusalem southwest to Gaza, where he met a eunuch (a term meaning literally a castrated man, but also used to mean simply an official of a royal court) of the Queen of Ethiopia (probably meaning Nubia -- what we now call the Sudan), returning home after worshipping in Jerusalem. The man was reading from Isaiah 53 ("He was wounded for our transgressions"), and Philip told him about Jesus, and persuaded him that the words were a prophecy of the saving work of Jesus. The man was baptized, and went on his way rejoicing, while Philip went north to Caesarea, the major seaport of Israel, and its secular capital.

When Paul (accompanied by Luke) was going up to Jerusalem for the last time, he paused at Caesarea and spent several days with Philip. (This may be the source of some of the information Luke used in writing the early chapters of Acts.) We are told that Philip had four daughters who prophesied. (This is relevant to discussions of the role of women in the Church.)*