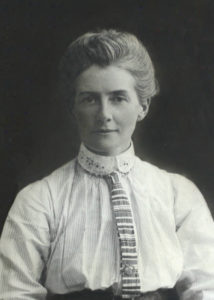 Living God, the source of all healing and wholeness: we bless you for the compassionate witness of your servant Edith Cavell. Inspire us to be agents of peace and reconciliation in a world beset by injustice, poverty, and war. We ask this through Jesus Christ, the Prince of Peace, who lives and reigns with you and the Holy Spirit, one God, to the ages of ages. Amen.

Edith Louisa Cavell (December 1865 – 12 October 1915) was a British nurse. She is celebrated for saving the lives of soldiers from both sides without discrimination and in helping some 200 Allied soldiers escape from German-occupied Belgium during the First World War, for which she was arrested. She was accused of treason, found guilty by a court-martial and sentenced to death. Despite international pressure for mercy, she was shot by a German firing squad. Her execution received worldwide condemnation and extensive press coverage.

The night before her execution, she said, "Patriotism is not enough. I must have no hatred or bitterness towards anyone." These words were later inscribed on a memorial to her near Trafalgar Square. Her strong Anglican beliefs propelled her to help all those who needed it, both German and Allied soldiers. She was quoted as saying, "I can’t stop while there are lives to be saved."

Cavell, who was 49 at the time of her execution, was already notable as a pioneer of modern nursing in Belgium.

Cavell was born on 4 December 1865 in Swardeston, a village near Norwich. She was the eldest of the four children of the Reverend Frederick Cavell, vicar of Swardeston, and his wife Louisa Sophia Warming .

After a period as a governess, including for a family in Brussels from 1890 to 1895, she returned home to care for her father during a serious illness. The experience led her to become a nurse after her father's recovery.

In 1907, Cavell was recruited by Dr Antoine Depage to be matron of a newly established nursing school, L'École Belge d'Infirmières Diplômées (or the Berkendael Medical Institute) in Brussels.

In November 1914, after the German occupation of Brussels, Cavell began sheltering British and French soldiers as well as Belgian and French civilians of military age, and funnelling them out of occupied Belgium to the neutral Netherlands. This placed Cavell in violation of German military law. German authorities became increasingly suspicious of the nurse's actions, which were further fuelled by her outspokenness.

She was arrested on 3 August 1915 and charged with harbouring Allied soldiers. She was held in Saint-Gilles prison for ten weeks, the last two of which were spent in solitary confinement.She made three depositions to the German police (on 8, 18 and 22 August), admitting that she had been instrumental in conveying about 60 British and 15 French soldiers, as well as about 100 French and Belgian civilians of military age, to the frontier and had sheltered most of them in her house.

At her court-martial, she was prosecuted for aiding British and French soldiers, in addition to young Belgian men, to cross the Dutch border and eventually enter Britain. She admitted her guilt when she signed a statement the day before the trial.

In spite of diplomatic pressure placed by the United States and other neutral countries, she was executed by firing squad in Brussels on 12 October 1915.*

*Wikipedia, via The Lectionary, http://www.satucket.com/lectionary/Edith_Cavell.html