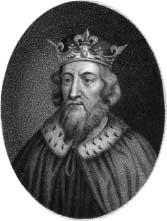 O God, who called your servant Alfred to an earthly throne that he might advance your heavenly kingdom and gave him zeal for your church and love for your people: Grant that we, inspired by his example and prayers, may remain steadfast in the work you have given us to do for the building up of your reign of love; through Jesus Christ our Lord, who lives and reigns with you and the Holy Spirit, one God, for ever and ever. Amen.

Alfred was born in 849 at Wantage, Berkshire, youngest of five sons of King Aethelwulf. He wished to become a monk, but after the deaths (all in battle, I think) of his father and his four older brothers, he was made king in 871. He proved to be skilled at military tactics, and devised a defensive formation which the Danish charge was unable to break. After a decisive victory at Edington in 878, he reached an agreement with the Danish leader Guthrum, by which the Danes would retain a portion of northeastern England and be given other concessions in return for their agreement to accept baptism and Christian instruction. From a later point of view, it seems obvious that such a promise could not involve a genuine change of heart, and was therefore meaningless (and indeed, one Dane complained that the white robe that he was given after his baptism was not nearly so fine as the two that he had received after the two previous times that he had been defeated and baptized). However, Alfred's judgement proved sound. Guthrum, from his point of view, agreed to become a vassal of Christ. His nobles and chief warriors, being his vassals, were thereby obligated to give their feudal allegiance to Christ as well. They accepted baptism and the presence among them of Christian priests and missionaries to instruct them. The door was opened for conversions on a more personal level in that and succeeding generations.

In his later years, having secured a large degree of military security for his people, Alfred devoted his energies to repairing the damage that war had done to the cultural life of his people. He translated Boethius' Consolations of Philosophy into Old English, and brought in scholars from Wales and the Continent with whose help various writings of Bede, Augustine of Canterbury, and Gregory the Great were likewise translated. He was much impressed by the provisions in the Law of Moses for the protection of the rights of ordinary citizens, and gave order that similar provisions should be made part of English law. He promoted the education of the parish clergy. In one of his treatises, he wrote: "He seems to me a very foolish man, and very wretched, who will not increase his understanding while he is in the world, and ever wish and long to reach that endless life where all shall be made clear."

He died on 26 October 899, and was buried in the Old Minster at Winchester. Alone among English monarchs, he is known as "the Great."*