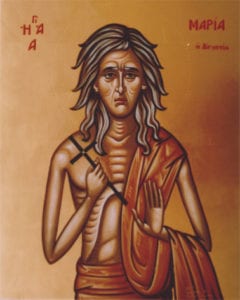 O God, whose glory it is always to have mercy: Be gracious to all who have gone astray from your ways, and restore them again like your servant Maryam of Qidun, that with penitent hearts and steadfast faith they might embrace and hold fast the unchangeable truth of your Word, Jesus Christ; who with you and the Holy Spirit lives and reigns, one God, for ever and ever. Amen.

Maryam was orphaned at the age of 7 and so then lived a life as an achorite with her uncle Abraham, a hermit, for 20 years. When she was a young woman, one of the monks who followed Abraham desired Maryam. After a year of attempts, they finally had sex. Upon losing her virginity, she fell into despair and, rather than confess her sin to her uncle, she moved to another town, and established herself as a tavern prostitute.

In a dream, Abraham realized that Maryam had been taken captive by a life of sin. He searched for her for two years. When he finally heard of her whereabouts, he put on military garb, mounted a horse, and set out to the town where she resided. He entered the tavern and requested that he take a meal with her. They shared a lavish meal together and finally retreated to Maryam's room, where Abraham said, "My daughter Maryam, don't you know me? Whatever has happened to you? Why did you not just tell me when you had sinned? I would not have been angry with you, for who is without sin, except for God alone? I would have done penance for you myself, yet instead you have left me all alone in unspeakable sadness and grief."

Together they returned to Qidun. Once there Maryam pleased God more by her sincere repentance than she ever had by her virginity.*

*The Lectionary, via Wikipedia, http://satucket.com/lectionary/Maryam_Qidun.html