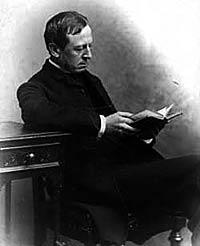 O Lord our God, we thank you for instilling in the heart of your servant William Reed Huntington a fervent love for your church and its mission in the world; and we pray that, with unflagging faith in your promises, we may make known to all people your blessed gift of eternal life; through Jesus Christ our Lord, who lives and reigns with you and the Holy Spirit, one God, for ever and ever. Amen.

W R Huntington, although never a bishop, had more influence on the Episcopal Church than most bishops. He was born in Lowell, Massachusetts, in 1838, the son of a physician, studied at Harvard, and was ordained a priest in 1862. In each of the thirteen General Conventions of the Episcopal Church that met between 1870 and his death, he was a member, and indeed the most prominent member, of the House of Deputies. In 1871 he moved for the restoration of the ancient Order of Deaconesses, which was finally officially authorized in 1889. His parish became a center for the training of deaconesses. Huntington's was the chief voice calling for a revision of the Book of Common Prayer (completed in 1892), and his the greatest single influence on the process of revision. The prayers he wrote for it include the following, used during Holy Week and on Fridays.

Almighty God, whose dear Son went not up to joy but first

he suffered pain, and entered not into glory before he was

crucified: Mercifully grant that we, walking in the way of

the cross, may find it none other than the way of life

and peace; through the same thy Son Jesus Christ our Lord.