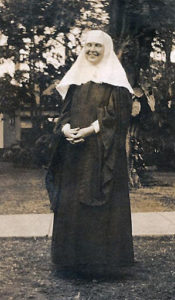 O God, whose blessed Son became poor that we through his poverty might be rich: Deliver us from an inordinate love of this world, that we, inspired by the devotion of your servant Eva Lee Matthews, may serve you with singleness of heart, and attain to the riches of the age to come; through Jesus Christ our Lord, who lives and reigns with you, in the unity of the Holy Spirit, one God, now and for ever. Amen.

Eva Lee Matthews was born on February 9, 1862, in Glendale, Ohio. Her father was Thomas Stanley Matthews, a justice on the United States Supreme Court. She attended Wellesley College but did not graduate.

From a young age, Matthews was concerned with helping others. She was a devout member of the Episcopal Church. In 1891, Matthews spent some time in Omaha, Nebraska, helping the poor and teaching children at a parochial school. She left Omaha in 1894, and in 1895, she traveled with her brother to Palestine. Upon her return to the United States, Matthews authored a book, A Little Pilgrimage to Holy Places, which recounted her trip.

In 1896, Matthews relocated to Cincinnati, Ohio, where she worked at the Bethany Mission House, an Episcopal charitable organization designed to help the less fortunate residents of Cincinnati. It was at this time that Matthews and coworker Beatrice Henderson decided to create a new Episcopal religious order. The purpose of this order was to assist Cincinnati's poor, especially children. On August 6, 1898, Episcopal Church officials formally recognized Matthews' and Henderson's order, formally naming the group the Community of the Transfiguration. At this time, Matthews formally became a nun, and she became known as Sister Eva Mary.

Matthews served as the leader of the Community of the Transfiguration until her death in July 1928.*