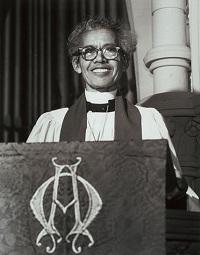 The Collect:
Liberating God, we thank you for the steadfast courage of your servant Pauli Murray, who fought long and well: Unshackle us from the chains of prejudice and fear, that we may show forth the reconciling love and true freedom which you revealed in your Son our Savior Jesus Christ; who lives and reigns with you and the Holy Spirit, one God, now and for ever. Amen.
Anna Pauline "Pauli" Murray (November 20, 1910 – July 1, 1985) was an American civil rights activist, women's rights activist, lawyer, and author. Drawn to the ministry, in 1977 Murray became the first black woman to be ordained as an Episcopal priest and among the first group of women to become priests in this church.*
This first group of women was known as the Philadelphia 11. The church at first declared those ordinations - 11 women in Philadelphia on July 29, 1974, and four the next year in Washington, D.C. - to be both "irregular" and "invalid," but eventually labeled them valid though irregular. In 1976, the church's national governing body, pressured by wide acceptance of those irregular ordinations, changed the rules and allowed for the ordination of women as priests, not just as deacons. It also "regularized" the Philadelphia and Washington ordinations.†
*The Lectionary, via Wikipedia, http://www.satucket.com/lectionary/pauli_murray.html
†National Catholic Reporter, https://www.ncronline.org/news/parish/episcopal-church-celebrates-40-years-women-priesthood
Posted by Whit+ at 6:46 AM