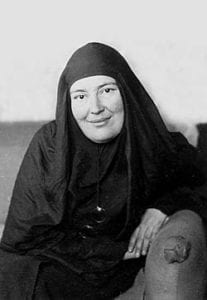 O Creator and Giver of Life, who crowned your martyr Maria Skobtsova with glory and gave her as an example of service to the suffering and poor even unto death: Teach us to love Christ in our neighbors, and thereby battle injustice and evil with the light of the Resurrection; through Jesus Christ our Lord, who lives and reigns with you and the Holy Spirit, one God in glory everlasting. Amen.

Maria was born to an aristocratic family in 1891 in Riga, Latvia, then part of the Russian Empire. She was given the name Elizaveta Pilenko. Her father died when she was a teenager, and she embraced atheism. In 1906 her mother moved the family to St. Petersburg, where she became involved in radical intellectual circles. In 1910 she married a Bolshevik by the name of Dmitriy Kuz'min-Karavaev. During this period of her life she was actively involved in literary circles and wrote much poetry. By 1913 her marriage to Dimitriy had ended.

Through a look at the humanity of Christ — "He also died. He sweated blood. They struck his face" — she began to be drawn back into Christianity. She moved—now with her daughter, Gaiana—to the south of Russia where her religious devotion increased.

In 1918, after the Bolshevik Revolution, she was elected deputy mayor of Anapa in Southern Russia. When the anti-communist White Army took control of Anapa, the mayor fled and she became mayor of the town. The White Army put her on trial for being a Bolshevik. However, the judge was a former teacher of hers, Daniel Skobtsov, and she was acquitted. Soon the two fell in love and were married.

Soon, the political tide was turning again. In order to avoid danger, Elizaveta, Daniel, Gaiana, and Elizaveta's mother Sophia fled the country. Finally they arrived in Paris in 1923. Soon Elizaveta was dedicating herself to theological studies and social work.

Soon, Daniel and Elizaveta's marriage was falling apart. Elizaveta moved into central Paris to work more directly with those who were most in need.

Her bishop encouraged her to take vows as a nun, something she did only with the assurance that she would not have to live in a monastery, secluded from the world. In 1932, with Daniel Skobtov's permission, an ecclesiastical divorce was granted and she took monastic vows. In religion she took the name Maria. Eventually, Fr. Dmitri Klepinin would be sent to be the chaplain of the house.

Mother Maria made a rented house in Paris her "convent". It was a place with an open door for refugees, the needy and the lonely. It also soon became a center for intellectual and theological discussion. In Mother Maria these two elements—service to the poor and theology—went hand-in-hand.

After the Fall of France in 1940, Jews began approaching the house asking for baptismal certificates, and Father Dimitri would provide them. Many Jews came to stay with them. They provided shelter and helped many to flee the country. Eventually the house was closed down. Mother Maria, Fr. Dimitri, her son Yuri and her mother Sophia were all arrested by the Gestapo. Fr. Dimitri and Yuri both died at the Dora concentration camp.

*Source, The Lectionary, via Wikipedia - http://satucket.com/lectionary/maria_skobstova.html