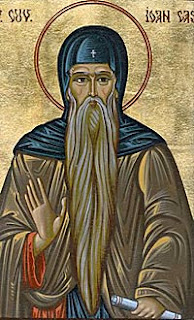 Holy God, whose beloved Son Jesus Christ blessed the pure in heart: Grant that we, together with your servant John Cassian and in union with his prayers, may ever seek the purity with which to behold you as you are; one God in Trinity of persons now and for ever. Amen.

Saint John Cassian (ca. 360 – 435) (Latin: Jo(h)annes Eremita Cassianus, Joannus Cassianus, or Joannes Massiliensis), John the Ascetic, or John Cassian the Roman, is a Christian theologian celebrated in both the Western and Eastern Churches for his mystical writings. He is known both as one of the "Scythian monks" and as one of the "Desert Fathers." John Cassian was born around 360 probably in the region of Scythia Minor (now Dobruja in modern-day Romania), although some scholars assume a Gallic origin. He was involved in a disputation concerning the Patriarch of Constantinople (St. John Chrysostom), and, when the Patriarch was forced into exile from Constantinople in 404, the Latin-speaking John Cassian was sent to Rome to plead his cause before Pope Innocent I. While he was in Rome John Cassian accepted the invitation to found an Egyptian style monastery in southern Gaul, near Marseille. His foundation, the Abbey of St Victor, a complex of monasteries for both men and women, was one of the first such institutes in the west, and served as a model for later monastic development. Cassian's abbey and writings influenced St. Benedict, who incorporated many of the same principles into his monastic rule. Since Benedict's rule is still used by Benedictine, Cistercian, and Trappist monks, the thought of John Cassian still guides the spiritual lives of thousands of men and women in the Western Church. John Cassian wrote two major spiritual works, the Institutions and Conferences. In these, he codified and transmitted the wisdom of the Desert Fathers of Egypt. The Institutes (Latin: "De institutis coenobiorum") deal with the external organization of monastic communities, while the Conferences (Latin: "Collationes") deal with "the training of the inner man and the perfection of the heart." The spiritual traditions of John Cassian had an immeasurable effect on Western Europe. Many different western spiritualities, from that of Saint Benedict to that of Saint Ignatius of Loyola, owe their basic ideas to John Cassian.*

*The Lectionary, via Wikipedia - http://www.satucket.com/lectionary/john_cassian.htm