Today, the Church remembers Johann Arndt and Jacob Böehme. Join us today at St. Alban's for Holy Eucharist at 12:10 p.m. to learn more about these two mystics.

Note: There is no Zoom Evening Prayer and Video Class tonight. It will resume on May 18.

Holy God, who dwells with those have a contrite and humble spirit; Revive our spirits; purify us from deceitful lusts; and cloth us in righteousness and true holiness; though Jesus Christ our Lord, who lives and reigns with you and the Holy Spirit, one God now and for ever. Amen. Johann Arndt (27 December 1555 – 11 May 1621) was a German Lutheran theologian who wrote several influential books of devotional Christianity. Although reflective of the period of Lutheran Orthodoxy, he is seen as a forerunner of pietism, a movement within Lutheranism that gained strength in the late 17th century.

Arndt's fame rests on his writings. These were mainly of a mystical and devotional kind, and were inspired by St Bernard, Johannes Tauler and Thomas à Kempis. His principal work, Wahres Christentum, i.e. "True Christianity", which has been translated into most European languages, has served as the foundation of many books of devotion, both Roman Catholic and Protestant. Arndt here dwells upon the mystical union between the believer and Christ, and endeavors, by drawing attention to Christ's life in His people, to correct the purely forensic side of the reformation theology, which paid almost exclusive attention to Christ's death for His people. 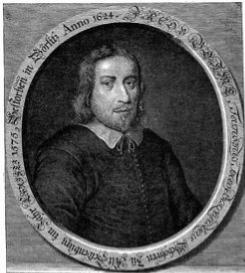 Jakob Böhme ( 24 April 1575 – 17 November 1624) was a German philosopher, Christian mystic, and Lutheran Protestant theologian. He was considered an original thinker by many of his contemporaries within the Lutheran tradition, and his first book, commonly known as Aurora, caused a great scandal. In contemporary English, his name may be spelled Jacob Boehme.

Böhme was born on 24 April 1575 at Alt Seidenberg (now Stary Zawidów, Poland). When he was 14 years old, he was apprenticed to become a shoemaker. He regularly prayed and read the Bible as well as works by visionaries such as Paracelsus, Weigel and Schwenckfeld, although he received no formal education. By 1599, Böhme was master of his craft with his own premises in Görlitz. That same year he married Katharina Kuntzschmann, and together he and Katharina had four sons and two daughters.

Böhme had a number of mystical experiences throughout his youth, culminating in a vision in 1600 as one day he focused his attention onto the exquisite beauty of a beam of sunlight reflected in a pewter dish. He believed this vision revealed to him the spiritual structure of the world, as well as the relationship between God and man, and good and evil. At the time he chose not to speak of this experience openly, preferring instead to continue his work and raise a family. In 1610 Böhme experienced another inner vision in which he further understood the unity of the cosmos and that he had received a special vocation from God.

Twelve years after the vision in 1600, Böhme began to write his first book, Die Morgenröte im Aufgang (The rising of Dawn). The book was given the name Aurora by a friend; however, Böhme originally wrote the book for himself and it was never completed. A manuscript copy of the unfinished work was loaned to Karl von Ender, a nobleman, who had copies made and began to circulate them. In 1619 Böhme wrote "De Tribus Principiis" or "On the Three Principles of Divine Being". It took him two years to finish his second book, which was followed by many other treatises, all of which were copied by hand and circulated only among friends. The year 1622 saw Böhme write some short works all of which were subsequently included in his first published book on New Year's Day 1624, under the title Weg zu Christo (The Way to Christ).

The publication caused another scandal and following complaints by the clergy, Böhme was forced into exile in Dresden. In Dresden he was accepted by the nobility and high clergy. His intellect was also recognized by the professors of Dresden. He eventually returned home, but he fell terminally ill with a bowel complaint and died on 17 November 1624.

The chief concern of Böhme's writing was the nature of sin, evil and redemption. Consistent with Lutheran theology, Böhme preached that humanity had fallen from a state of divine grace to a state of sin and suffering, and that God's goal was to restore the world to a state of grace. There are some serious departures from accepted Lutheran theology, however, such as his rejection of sola fide (justification by faith alone). A difficulty with his theology is the fact that he had a mystical vision, which he reinterpreted and reformulated. God exists without time or space, he regenerates himself through eternity. Böhme restates the trinity as truly existing but with a novel interpretation. God, the Father is fire, who gives birth to his son, whom Böhme calls light. The Holy Spirit is the living principle, or the divine life. Evil is seen as "the disorder, rebellion, perversion of making spirit nature's servant", which is to say a perversion of initial Divine order.

* The Lectionary, via Wikipedia, http://www.satucket.com/lectionary/arndt-boehme.html