Join us today, Wednesday, May 25  to learn more about the Venerable Bede at St. Alban's for Holy Eucharist today at 12:10 p.m. or join all our Monroe Episcopal churches tonight for 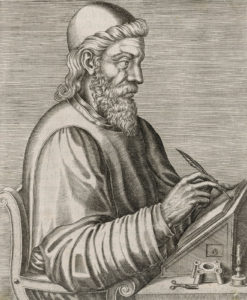 Almighty God, who has enriched your Church with the learning and holiness of your servant Bede: Grant us to find in Scripture and disciplined prayer the image of your Son our Savior Jesus Christ, and to fashion our lives according to his likeness, to the glory of your great Name and the benefit of your holy church; through the same Jesus Christ our Lord. Amen.

At the age of seven, Bede’s parents brought him to the nearby monastery at Jarrow (near Durham in northeast England) for his education. There, as he later wrote, “spending all the remaining time of my life . . . I wholly applied myself to the study of Scripture, and amidst the observance of regular discipline, and the daily care of singing in the church, I always took delight in learning, teaching, and Writing.”

Bede was ordained deacon at nineteen, and presbyter at thirty. He died on the eve of the Ascension in 735 while dictating a vernacular translation of the Gospel According to John. About 1020, his body was removed to Durham and placed in the Galilee, the Lady Chapel at the west end of the Cathedral nave.

Bede was the greatest scholar of his time in the Western Church. He wrote commentaries on the Scriptures based on patristic interpretations. His treatise on chronology was standard for a long time. He also wrote on orthography, poetic meter, and especially on history. His most famous work, the Ecclesiastical History of England, written in Latin, remains the primary source for the period 597 to 731, when Anglo-Saxon culture developed and Christianity triumphed. In this work, Bede was clearly ahead of his time. He consulted many documents, carefully evaluated their reliability, and cited his sources. His interpretations were balanced and judicious. He also wrote The Lives of the Holy Abbots of Wearmouth and Jarrow, and a notable biography of Cuthbert, both in prose and verse.

His character shines through his work—an exemplary monk, an ardent Christian, devoted scholar, and a man of pure and winsome manners. He received the unusual title of Venerable more than a century after his death.*

* A Great Cloud of Witnesses, A Calendar of Commemorations, Copyright © 2016 by The Domestic and Foreign Missionary Society of The Protestant Episcopal Church in the United States of America