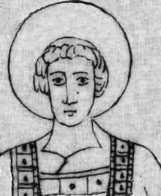 Almighty God, who raised up your servant Alcuin as a beacon of learning: Shine in our hearts, we pray, that we may also show forth your praise in our own generation, for you have called us out of darkness and into your marvelous light; through Jesus Christ our Lord, who lives and reigns with you and the Holy Spirit, one God, now and for ever. Amen.

Alcuin was an Englishman from York, born into a noble family about 730, and educated by a pupil of Bede. Having become a deacon, he was made head of the cathedral school at York around 770. In 781 he was asked by the Emperor Charlemagne to become his minister of education. He accepted, and established schools at many cathedrals and monasteries, and promoted learning in every way he could. In the preceding years of constant wars and invasions, many ancient writings had been lost. Alcuin established scriptoria, dedicated to the copying and preservation of ancient manuscripts, both pagan and Christian. That we have as much as we do of the writings of classical Roman authors is largely due to Alcuin and his scribes. (He is credited with the invention of cursive script, in which the letters are connected for greater speed of writing.) To Alcuin, backed by Charlemagne, belongs much of the credit for the  revision and organization of the Latin liturgy, the preservation of many of the ancient prayers, and the development of plainchant. He and his fellow theologians at Charlemagne's capital of Aachen (or Aix-le-Chappelle) were important advocates of the doctrine that the Holy Ghost proceeds from the Father and the Son jointly. Unfortunately, the East, which regarded the Emperor at Byzantium as the sole Emperor, resented Charlemagne's assumption of the title of Holy Roman Emperor, and this hardened their opposition to the aforesaid doctrine, thus contributing to the rift between East and West.*