Gregory of Nazianzus, Bishop and Theologian, 389 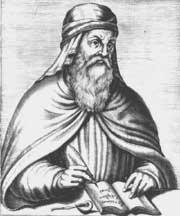 The Collect:
Almighty God, who has revealed to your Church your eternal Being of glorious majesty and perfect love as one God in Trinity of Persons: Give us grace that, like your bishop Gregory of Nazianzus, we may continue steadfast in the confession of this faith, and constant in our worship of you, Father, Son, and Holy Spirit; who live and reign for ever and ever. Amen.
Gregory of Nazianzus, one of the Cappadocian Fathers, loved God, the art of letters, and the human race—in that order. He was born about 330 in Nazianzus in Cappadocia (now Turkey), the son of a local bishop. He studied rhetoric in Athens with his friend Basil of Caesarea, and Julian, later to be the apostate emperor.
Gregory, together with Basil, compiled an anthology of Origen’s works, The Philokalia. Two years later, he returned to his home, a town then rent by heresies and schism. His defense of his father’s orthodoxy in the face of a violent mob brought peace to the town and prominence to Gregory.
In 361, against his will, Gregory was ordained presbyter, and settled down to live an austere, priestly life. He was not to have peace for long. Basil, in his fight against the Arian Emperor Valens, compelled Gregory to become Bishop of Sasima. According to Gregory, it was “a detestable little place without water or grass or any mark of civilization.” He felt, he said, like “a bone flung to the dogs.” His friendship with Basil suffered a severe break.
Deaths in his family, and that of his estranged friend Basil, brought Gregory himself to the point of death. He withdrew for healing. In 379, Gregory moved to Constantinople, a new man and no longer in despair. He appeared as one afire with the love of God. His fame as a theologian rests on five sermons he delivered during this period on the doctrine of the Trinity. They are marked by clarity, strength, and a charming gaiety.
The next year, the new Emperor Theodosius entered Constantinople and expelled its Arian bishop and clergy. Then, on a rainy day, the crowds in the Great Church of Hagia Sophia acclaimed Gregory bishop, after a ray of sunlight suddenly shone on him.
Power and position meant nothing to Gregory. After the Ecumenical Council of 381, he retired to Nazianzus, where he died in 389. Among the Fathers of the Church, he alone is known as “The Divine,” “The Theologian.” *
*  A Great Cloud of Witnesses - A Calendar of Commemorations, Copyright © 2016 by The Domestic and Foreign Missionary Society of The Protestant Episcopal Church in the United States of America
Posted by Whit+ at 6:22 AM