Join us today for Holy Eucharist at 12:10 p.m. at St. Alban’s and learn about more about Zita of Tuscany.

Remember, we have no Evening Prayer or Video Class via Zoom this evening. All the local clergy are traveling to Shreveport to attend the installation of Michael Cannon as the new rector of St. Paul’s Episcopal Church in Shreveport. Please say a pray for Father Michael and all the folks at St. Paul’s.

Zita of Tuscany, Worker of Charity, 1271 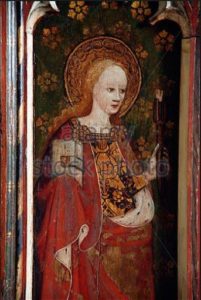 Merciful God, who has given to us all things necessary for life and godliness; Grant that we, like your servant Zita, may be faithful in the exercise of our duties and that, whatever you give us to do, we may do it heartily to you for the honor and glory of your Name; through him who has called us to virtue, Jesus Christ, your Son, our Lord. Amen.

Zita (c. 1212 – 27 April 1272) is an Italian saint, the patron saint of maids and domestic servants. She is often appealed to in order to help find lost keys.

Zita was born in Tuscany in the village of Monsagrati, not far from Lucca where, at the age of 12, she became a servant in the Fatinelli household. For a long time, she was unjustly despised, overburdened, reviled, and often beaten by her employers and fellow servants for her hard work and obvious goodness. The incessant ill-usage, however, was powerless to deprive her of her inward peace, her love of those who wronged her, and her respect for her employers. By this meek and humble self-restraint, Zita at last succeeded in overcoming the malice of her fellow-servants and her employers, so much so that she was placed in charge of all the affairs of the house. Her faith had enabled her to persevere against their abuse, and her constant piety gradually moved the family to a religious awakening.

Zita often said to others that devotion is false if slothful. She considered her work as an employment assigned to her by God, and as part of her penance, and obeyed her master and mistress in all things as being placed over her by God. She always rose several hours before the rest of the family and employed in prayer a considerable part of the time which others gave to sleep.

One anecdote relates a story of Zita giving her own food or that of her master to the poor. On one morning, Zita left her chore of baking bread to tend to someone in need. Some of the other servants made sure the Fatinelli family was aware of what happened; when they went to investigate, they claimed to have found angels in the Fatinelli kitchen, baking the bread for her.

According to another story, a housemaid who worked with her, maybe jealous of the affection Zita received from everybody, told their master that Zita used to steal from the Fatinellis what she gave to the poor. One day her master met Zita while she was going to see a needy family, with her apron full of things for them. He asked Zita what she was carrying and she answered that she was carrying only flowers and fronds. When she loosened her apron, flowers fell at her feet. *

* The Lectionary, via Wikipedia, http://www.satucket.com/lectionary/Zita.html