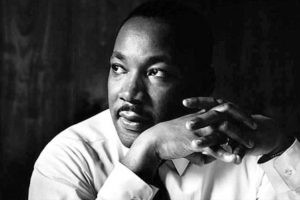 Almighty God, by the hand of Moses your servant you led your people out of slavery, and made them free at last: Grant that your Church, following the example of your prophet Martin Luther King, may resist oppression in the name of your love, and may strive to secure for all your children the blessed liberty of the Gospel of Jesus Christ; who lives and reigns with you and the Holy Spirit, one God, now and forever. Amen.

"We shall overcome because the arc of the moral universe is long, but it bends toward justice." Washington National Cathedral, March 31, 1968.
"Darkness cannot drive out darkness, only light can do that. Hate cannot drive out hate, only love can do that." Strength to Love, 1963.
"I believe that unarmed truth and unconditional love will have the final word in reality. This is why right, temporarily defeated, is stronger than evil triumphant." Nobel Peace Prize acceptance speech, Oslo, Norway, 1964. *
* These three quotes are  from the South Wall of the Martin Luther King, Jr. Memorial in Washington, D.C. Martin Luther King Jr. Martin Luther King Jr., an African-American clergyman and civil rights leader, was fatally shot at the Lorraine Motel in Memphis, Tennessee, on April 4, 1968, at 6:01 p.m. CST. He was rushed to St. Joseph's Hospital, where he died at 7:05 p.m. King's birthday was finally approved as a federal holiday in 1983, and all 50 states made it a state government holiday by 2000. Officially, King was born on January 15, 1929 in Atlanta. But the King holiday is marked every year on the third Monday in January.
Posted by Whit+ at 7:52 AM