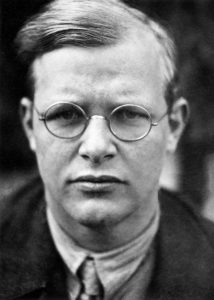 Embolden our lives, O Lord, and inspire our faiths, that we, following the example of your servant Dietrich Bonhoeffer, might embrace your call with undivided hearts; through Jesus Christ our Savior, who lives and reigns with you and the Holy Spirit, one God, for ever and ever. Amen.

Bonhoeffer was born in 1906, son of a professor of psychiatry and neurology at the University of Berlin. He was an outstanding student, and at the age of 25 became a lecturer in systematic theology at the same University. When Hitler came to power in 1933, Bonhoeffer became a leading spokesman for the Confessing Church, the center of Protestant resistance to the Nazis. He organized and for a time led the underground seminary of the Confessing Church. His book Life Together describes the life of the Christian community in that seminary, and his book The Cost of Discipleship attacks what he calls "cheap grace," meaning grace used as an excuse for moral laxity. Bonhoeffer had been taught not to "resist the powers that be," but he came to believe that to do so was sometimes the right choice. In 1939 his brother-in-law introduced him to a group planning the overthrow of Hitler, and he made significant contributions to their work. (He was at this time an employee of the Military Intelligence Department.) He was arrested in April 1943 and imprisoned in Berlin. After the failure of the attempt on Hitler's life in April 1944, he was sent first to Buchenwald and then to Schoenberg Prison. His life was spared, because he had a relative who stood high in the government; but then this relative was himself implicated in anti-Nazi plots. On Sunday 8 April 1945, he had just finished conducting a service of worship at Schoenberg, when two soldiers came in, saying, "Prisoner Bonhoeffer, make ready and come with us," the standard summons to a condemned prisoner. As he left, he said to another prisoner, "This is the end -- but for me, the beginning -- of life." He was hanged the next day, less than a week before the Allies reached the camp. *