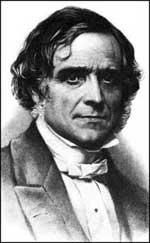 Almighty God, who has restored our human nature to heavenly glory through the perfect obedience of our Savior Jesus Christ: Enliven in your Church, we pray, the passion for justice and truth, that, like your servant Frederick Denison Maurice, we may work and pray for the triumph of the kingdom of Christ; who lives and reigns with you and the Holy Spirit, one God, now and for ever, Amen.

F. D. Maurice was born in 1805, the son of a Unitarian clergyman. He studied civil law at Cambridge, but refused the degree in 1827 rather than declare himself an Anglican. However, he was later converted, and in 1834 was ordained to the priesthood.

In 1838, he published his major work, The Kingdom of Christ, a discussion of the causes and cures of divisions within the Christian Church. He was much concerned with the role of the Church in speaking to social questions, speaking of “faith in a God who has redeemed mankind, in whom I may vindicate my rights as a man.” Together with his friends John Ludlow and Charles Kingsley, he organized the Christian Socialist Movement, which, he wrote, “will commit us at once to the conflict we must engage in sooner or later with the unsocial Christians and unchristian Socialists.” His work is one of the reasons why Socialism in England has been largely devoid of the avowedly anti-Christian overtones it had in many other countries. (In the late 1940’s the majority of the members of the British Cabinet, then organized under the Labor Party, met regularly under the leadership of Sir Stafford Cripps, the Chancellor of the Exchequer, for prayer, Bible study, and discussion of the application of Christian principles to public life.)

Soon after his ordination, Maurice became Professor of English Literature and History at King’s College, London, and in 1846, Professor of Theology as well. However, his book Theological Essays, published in 1853, was regarded by many readers as doubtfully orthodox, and the resulting furor cost him his professorships. In 1854, he founded the Working Men’s College, and became its first head. He was professor of Moral Theology at Cambridge from 1866 until his death in 1872.*