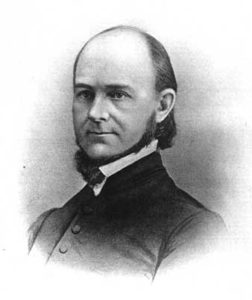 O God, who sent your Son to preach peace to those who are far off and to those who are near: call us from comfortable complacency to preach, teach, and plant your church on new frontiers, after the example of your servant James Lloyd Breck; through Jesus Christ our Lord, who liveth and reigneth with thee and the Holy Spirit, one God, for ever and ever. Amen.

Breck was born 27 June 1818 near Philadelphia, and attended high school at the Flushing Institute, founded by William Augustus Muhlenberg (see 8 April), who inspired him to resolve at the age of sixteen to devote himself to missionary activity. In 1844, by then a priest, he went to Wisconsin (then on the frontier) with two classmates, under the direction of Bishop Kemper, to found Nashotah House, intended as a monastic community, a seminary, and a center for theological work.  It continues today as a seminary and representative of one traditional aspect of Anglican thought and practice.

In a letter to a friend, Breck described the seminary in his day as follows:

The students boarding with us are all theological. They are chiefly young men, sons of the farmers, and all communicants of the Church. Our students, like ourselves, are poor, but not the less worthy for all that. They seek the Ministry, but are unable to attain it without aid. We have a house; for this we pay no rent; it belongs to the Church, and so do we. We have land. They work four hours a day for their board and washing, and we give them their education without cost. Thus their clothing is their only expense, and to enable them to purchase this, we give them six weeks vacation during the harvest, when they can earn the highest wages.

We rise at 5am, Matins at 6. The Morning Service of the Church at 9. On Wednesdays and Fridays, the Litany at 12. On Thursdays, the Holy Eucharist at the same hour of 12. The Evening service of the Church at 3, and Family Prayer or Vespers at 6:30 or 7pm. Our students labor between 7 and 9 in the morning, and 1 and 3 in the afternoon.

In 1850, Breck moved on to Minnesota, where he founded schools for boys and girls, and the Seabury Divinity School at Faribault (now part of Seabury-Western Seminary in Chicago). He also began mission work among the Chippewa Indians, and laid the foundation for work among them by Christian priests from their own people. In 1867 he moved on to California to build another seminary. He died there in 1876. *