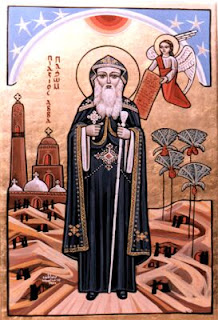 Today, the Church remembers Pachomius of Tabenissi. Pachomius (Greek: Παχώμιος, ca. 292–348), also known as Pachome and Pakhomius, is generally recognized as the founder of Christian cenobitic monasticism, which is a monastic tradition that stresses community life, and where the community belongs to a religious order, and the life of the cenobitic monk is regulated by a religious rule, a collection of precepts.

Pachomius was born in 292 in Thebes (Luxor, Egypt) to pagan parents. He converted to Christianity and was baptized in 314. Pachomius was abbot to the cenobites for some forty years. During an epidemic (probably plague), Pachomius called the monks, strengthened their faith, and appointed his successor. Pachomius then died on 9 May 348 A.D.

By the time Pachomius died eight monasteries and several hundred monks followed his guidance. Within a generation, cenobic practices spread from Egypt to Palestine and the Judean Desert, Syria, North Africa and eventually Western Europe.

Set us free, O God, from all false desires, vain ambitions, and everything that would separate us from your love; that, like your servant Pachomius, we might give ourselves fully to a life of discipleship, seeking you alone and serving those whom you have given us to serve; through Jesus Christ, our only mediator and advocate. Amen.