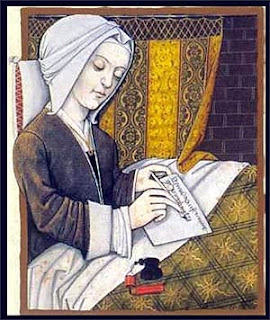 Draw the souls of your people into your love, O God, that like your servant Mechthild, we may yearn to be fully yours, for you know us better than we can know ourselves; through Jesus Christ our Lord, who lives and reigns with you and the Holy Spirit, one God now and for ever. Amen.

Mechthild of Magdeburg (c. 1207 – c. 1282/1294), a Beguine, was a Christian medieval mystic, whose book Das fließende Licht der Gottheit (The Flowing Light of Divinity) described her visions of God, and was composed between 1250 and 1280. What is unusual about her writings is that she composed her work in middle low German at a time when most wisdom literature was composed in Latin. Thus she is remembered as an early proponent and popularizer of German as a language worthy of the divine and holy. Mechthild’s writing is exuberant and emotional: her descriptions of her visions are filled with passion. While her work was translated into Latin during her lifetime, her work was largely forgotten by the 15th century, but was rediscovered in the late 19th century. Her work has been increasingly studied, both for its academic interest and as a work of devotional literature.
Posted by Whit+ at 7:11 AM