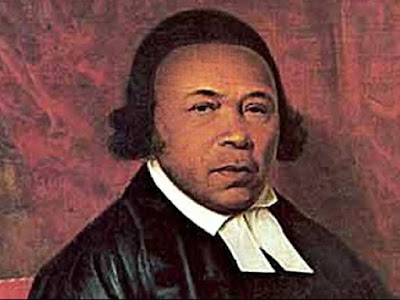 It seems especially appropriate that in February – Black History Month – the Church remembers Absalom Jones In October 1794, St. Thomas African Episcopal Church, a church built begun by Jones and others was admitted into the Episcopal Diocese of Pennsylvania, by Bishop White. Jones was ordained deacon in 1795 and as priest on September 21, 1802. Jones died February 13, 1818 in Philadelphia. In 1996 his remains were reinterred in a chapel of his church, St. Thomas. Known as “the Black Bishop of the Episcopal Church,” Jones was an example of persistent faith in God and in the Church as God’s instrument. (taken in part from Holy Women, Holy Men)

The Collect of the Day

Set us free, heavenly Father, from every bond of prejudice and fear; that, honoring the steadfast courage of your servant Absalom Jones, we may show forth in our lives the reconciling love and true freedom of the children of God, which you have given us in your Son our Savior Jesus Christ; who lives and reigns with you and the Holy Spirit, one God, now and for ever. Amen.