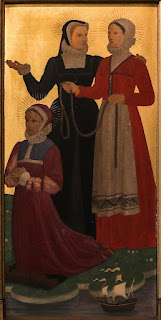 Most Merciful God, who despises not a broken and contrite heart and has promised to fill those who hunger and thirst after righteousness; We humbly beseech you, remember not the sins and offenses of our ancestors, but grant that, like your servants Margaret Ward, Margaret Clitherow, and Anne Line, we may sanctify you in our hearts and be always ready to answer for our faith with meekness and fear; through our only Mediator and Advocate, Jesus Christ our Lord. Amen.

These three women were all executed for harboring Roman Catholic priests during the reign of Elizabeth I.

Margaret Ward was born in Cheshire around 1550. She was living in London in the service of a lady of the "first rank" when she learned of the severe maltreatment of Richard Watson, a priest confined at Bridewell Prison. She obtained permission to visit him. She was thoroughly searched before and after early visits, but gradually the authorities became less cautious, and she managed to smuggle a rope into the prison. Fr. Watson escaped, but hurt himself in so doing, and left the rope hanging from the window. The boatman whom Ward had engaged to convey him down the river then refused to carry out the bargain. Ward, in her distress, confided in another boatman, John Roche, who undertook to assist her. He provided a boat and exchanged clothes with the priest. Fr. Watson escaped, but Roche was captured in his place, and Ward, having been Fr. Watson's only visitor, was also arrested. Margaret Ward was kept in irons for eight days, but absolutely refused to disclose the priest's whereabouts. At her trial, she admitted to having helped Fr. Watson to escape, and rejoiced in "having delivered an innocent lamb from the hands of those bloody wolves". She was hanged at Tyburn on 30 August 1588 along with Roche and four others.

Margaret Clitherow was born in 1556, Her father was a respected businessman, a wax-chandler and Sheriff of York in 1564. She converted to Roman Catholicism in 1574. She risked her life by harboring and maintaining priests, which was a capital offence. Her home became one of the most important hiding places for fugitive priests in the north of England. Local tradition holds that she also housed her clerical guests in the Black Swan Inn at Peaseholme Green, where the Queen's agents were lodged. In March 1586 the Clitherow house was searched. A frightened boy revealed the location of the priest hole. Margaret was arrested and called before the York assizes for the crime of harbouring Roman Catholic priests. Although pregnant with her fourth child, she was executed on Lady Day, 1586, (which also happened to be Good Friday that year) in the Toll Booth at Ouse Bridge, by being crushed to death, the standard inducement to force a plea. Following her execution, Elizabeth I wrote to the citizens of York expressing her horror at the treatment of a woman. Because of her sex, she argued, Clitherow should not have been executed.

Anne Line is believed to have been born circa the early 1560s in Jenkyn Maldon. At some time in the early 1580s converted to the Roman Catholic Church along with her brother William and Roger Line, the man she married in February 1583. Roger Line and her brother William were arrested together while attending Mass, and were imprisoned and fined. Roger Line was banished and went to Flanders. Around 1594 Father John Gerard, S.J., opened a house of refuge for hiding priests, and put the newly widowed Anne Line in charge of it, despite her chronic ill-health. For about three years Anne Line continued to run this house while Fr John Gerard was in prison. Line was arrested on 2 February 1601 when her house was raided during the feast of the Purification, also known as Candlemas. On this day a blessing of candles traditionally takes place before the Mass, and it was during this rite that the raiders burst in and made arrests. The priest, Fr Francis Page, managed to slip into a special hiding place prepared by Anne Line and afterwards to escape, but she was arrested. She was tried on 26 February 1601 and was so weak from fever that she was carried to the trial in a chair. She told the court that so far from regretting having concealed a priest, she only grieved that she "could not receive a thousand more." Line was hanged on 27 February 1601. *

* The Lectionary, via wikipedia - see http://satucket.com/lectionary/Ward-Clitherow-Line.html