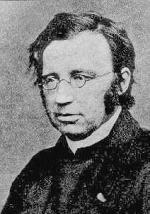 Grant, O God, that in all time of our testing we may know your presence and obey your will; that, following the example of your servant John Mason Neale, we may with integrity and courage accomplish what you give us to do, and endure what you give us to bear; through Jesus Christ our Lord, who lives and reigns with you and the Holy Spirit, one God, for ever and ever. Amen.

John Mason Neale was born in London in 1818, studied at Cambridge, and was ordained to the priesthood in 1842. He was offered a parish, but chronic ill health, which was to continue throughout his life, prevented him from taking it. In 1846 he was made warden of Sackville College, a position he held for the rest of his life. Sackville College was not an educational institution, but an almshouse, a charitable residence for the poor.

In 1854 Neale co-founded the Sisterhood of St. Margaret, an order of women in the Anglican Church dedicated to nursing the sick. Many Anglicans in his day, however, were very suspicious of anything suggestive of Roman Catholicism. Only nine years earlier, John H. Newman had encouraged Romish practices in the Anglican Church, and had ended up joining the Romanists himself. This encouraged the suspicion that anyone like Neale was an agent of the Vatican, assigned to destroy the Anglican Church by subverting it from within. Once Neale was attacked and mauled at a funeral of one of the Sisters. From time to time unruly crowds threatened to stone him or to burn his house. He received no honor or preferment in England, and his doctorate was bestowed by an American college (Trinity College, Hartford, Connecticut). However, his basic goodness eventually won the confidence of many who had fiercely opposed him, and the Sisterhood of St. Margaret survived and prospered.

Neale translated the Eastern liturgies into English, and wrote a mystical and devotional commentary on the Psalms. However, he is best known as a hymn writer and translator, having enriched English hymnody with many ancient and mediaeval hymns translated from Latin and Greek. (Note: See The Lectionary link below for this impressive list!)