Saint Mary the Virgin: Mother of Our Lord Jesus Christ

Today, the Church remembers the mother of Our Lord Jesus Christ. Mary’s willingness to do her part in God’s plan is what faith is all about. May we be so faithful! 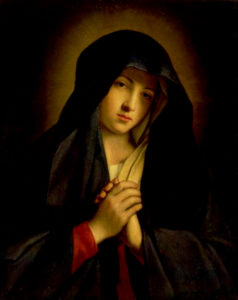 O God, you have taken to yourself the blessed Virgin Mary, mother of your incarnate Son: Grant that we, who have been redeemed by his blood, may share with her the glory of your eternal kingdom; through Jesus Christ our Lord, who lives and reigns with you, in the unity of the Holy Spirit, one God, now and for ever. Amen.

The honor paid to Mary, the virgin mother of Jesus Christ our Lord and God, goes back to the earliest days of the Church. Indeed, it goes back further, for even before the birth of her Son, Mary prophesied, "From this time forth, all generations shall call me blessed."

The New Testament records several incidents from the life of the Virgin: her betrothal to Joseph, the Annunciation by the angel Gabriel that she was to bear the Messiah, her Visitation to Elizabeth the mother of John the Baptist, the Nativity of our Lord, the visits of the shepherds and the magi, the Presentation of the infant Jesus in the Temple at the age of forty days, the flight into Egypt, the Passover visit to the Temple when Jesus was twelve, the wedding at Cana in Galilee and the performance of her Son's first miracle at her intercession, the occasions when observers said, "How can this man be special? We know his family!", an occasion when she came with others to see him while he was preaching, her presence at the foot of the Cross, where Jesus commends her to the care of the Beloved Disciple, and her presence with the apostles in the upper room after the Ascension, waiting for the promised Spirit. She is thus seen to be present at most of the chief events of her Son's life.

Besides Jesus himself, only two humans are mentioned by name in the Creeds. One is Pontius Pilate, Roman procurator of Judea from 26 to 36 AD. That Jesus was crucified by order of Pontius Pilate pins down the date of his death within a few years, and certifies that we are not talking, like the worshipers of Tammuz or Adonis, about a personification or symbol of the annual death and resurrection of the crops. His death is an event in history, something that really happened. The other name is that of Mary. The Creeds say that Christ was "born of the virgin Mary." That is to say, they assert on the one hand that he was truly and fully human, born of a woman and not descended from the skies like an angel. On the other hand, by telling us that his mother was a virgin they exclude the theory that he was simply an ordinary man who was so virtuous that he eventually, at his baptism, became filled with the Spirit of God. His virgin birth attests to the fact that he was always more than merely human, always one whose presence among us was in itself a miracle, from the first moment of his earthly existence. In Mary, Virgin and Mother, God gives us a sign that Jesus is both truly God and truly Man.

Little is known of the life of the Virgin Mary except insofar as it intersects with the life of her Son, and there is an appropriateness in this. The Scriptures record her words to the angel Gabriel, to her kinswoman Elizabeth, to her Son on two occasions. But the only recorded saying of hers to what may be called ordinary, run-of-the-mill hearers is her instruction to the servants at the wedding feast, to whom she says simply, indicating her Son, "Whatever he says to you, do it."

This we may take to be the summation of her message to the world. If we listen to her, she will tell us, "Listen to Him. Listen to my Son. Do what He tells you." When we see her, we see her pointing to her Son. If our regard for the Blessed Virgin does not have the immediate effect of turning our attention from her to the One whom she carried in her womb for nine months and suckled at her breast, to the Incarnate God, the Word made flesh, then we may be sure that it is not the kind of regard that she seeks. A right regard for her will always direct us to Him Who found in her His first earthly dwelling-place. *

* The Lectionary, James Kiefer, http://www.satucket.com/lectionary/Mary.htm
Posted by Whit+ at 7:19 AM