O Loving God, whose will it is that everyone should come to you and be saved: We bless your holy Name for your servants Thomas Gallaudet and Henry Winter Syle, and we pray that you will continually move your church to respond in love to the needs of all people; through Jesus Christ, who lives and reigns with you and the Holy Spirit, one God, now and for ever. Amen. 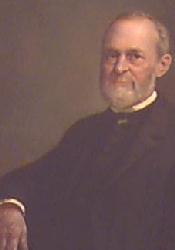 Thomas Gallaudet was born in 1822, in Hartford, Connecticut. His mother, Sophia was deaf, and his father, Thomas Hopkins Gallaudet, was the founder of the West Hartford School for the deaf, which was the principal institution for the education of the deaf in America from 1806 to 1857 (the year of the founding of Gallaudet College in Washington, DC). The father had intended to become a priest, but had become an educator of the deaf instead. The son also intended to seek ordination, but was persuaded by his father to work for a while first as a teacher of the deaf. He did, and so met and married Miss Elizabeth Budd, who was deaf. He was ordained in 1851, and the next year established St. Ann's Church in New York, especially for deaf persons, with services primarily in sign language. As a result of his work, congregations for the deaf were established in many cities. (Alternatively, some congregations that are mostly hearing will have someone standing near the front and signing the service for the benefit of deaf parishioners.) Gallaudet died 27 August 1902. 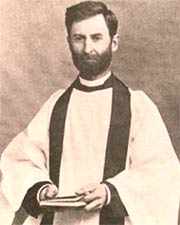 One of Gallaudet's students and parishioners was Henry Winter Syle, deaf from an early age, who had attended Trinity College (Hartford, Conn), St John's (Cambridge, England), and Yale. Gallaudet encouraged him to become  a priest, and in 1876 he became the first deaf person to be ordained  by the Episcopal Church in the United States. He established a  congregation for the deaf in 1888, and died 6 January 1890.*

*The Lectionary, James Kiefer, http://satucket.com/lectionary/Gallaudet&Syle.htm
Posted by Whit+ at 7:54 AM