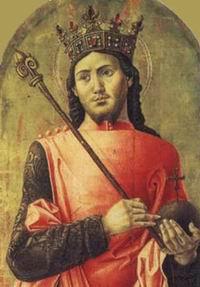 O God, you called your servant Louis of France to an earthly throne that he might advance your heavenly kingdom, and gave him zeal for your church and love for your people: Mercifully grant that we who commemorate him this day may be fruitful in good works and attain to the glorious crown of your saints; through Jesus Christ our Lord, who lives and reigns with you and the Holy Spirit, one God, for ever and ever. Amen.

Louis IX was born at Poissy on April 25, 1214. His father, Louis VIII, died when Louis IX was 11 years old; he was crowned King at Rheims on November 29, 1226. His mother and regent, Blanche of Castile, inspired his early religious exercises of devotion and asceticism. At age 20, Louis married Margaret of Provence, who bore him 11 children, 9 of whom lived past infancy. Blanche remained a major influence on her son Louis IX until her death in 1252.

A man of unusual purity of life and manners, he was sincerely committed to his faith and to its moral demands. Living simply, dressing plainly, visiting hospitals, helping the poor, and acting with integrity and honesty, Louis IX believed that the crown was given him by God and God would hold him accountable for his reign.

During a campaign in 1242, King Louis became very ill. In an act customary of the piety and politics of his time and culture, he vowed if he recovered that he would lead a Crusade against the Muslims. Leaving his mother Blanche in charge of the kingdom, Louis led the Seventh Crusade (1248-1254). After an unsuccessful struggle, including capture by Egyptian forces, Louis IX went home to France.

Back in France, Louis’s piety inspired his patronage of the arts and encouraged the spread of Gothic architecture. One of his most notable commissions is Sainte-Chapelle (“Holy Chapel”), erected as a shrine for the Crown of Thorns and a fragment of the True Cross, precious relics of the Passion of Jesus that Louis had purchased in 1239–41 for a sum twice the total cost of the chapel itself.

A deplorable aspect of medieval Christianity was its anti-semitism, and despite his attempts to cultivate holiness, Louis IX was complicit in official action against Jewish believers. Louis ordered the expulsion of all Jews engaged in usury and the confiscation of their property to finance his crusade. At the urging of Pope Gregory IX, Louis also ordered the burning in Paris in 1243 of some 12,000 manuscript copies of the Talmud and other Jewish books and increased the power and authority of the Inquisition in France.

* A Great Cloud of Witnesses,  https://extranet.generalconvention.org/staff/files/download/19349

Note: Louisiana was named after King Louis XIV when the land was claimed for France in 1862, and that is why, this is “Not Our Louis!”