Join us today, Wednesday, June 8, to learn more  at St. Alban's for Holy Eucharist today at 12:10 p.m. or join all our Monroe Episcopal churches tonight for 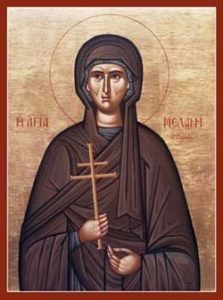 Most High and Merciful God, who called your servant Melania to forsake earthly comforts in order to devote herself to studying the scriptures and to welcoming the poor: Instruct us in the ways of poverty and the grace of hospitality, that we might comfort those who have no place to rest and teach the way of your love; through Jesus Christ our Lord. Amen.

Melania the Elder, (born in Spain, ca. 350–died in Jerusalem before 410 or in c. 417) was a Desert Mother who was an influential figure in the Christian ascetic movement (the Desert Fathers and Mothers) that sprang up in the generation after the Emperor Constantine made Christianity a legal religion of the Roman Empire. She was a contemporary of, and well known to, Abba Macarius and other Desert Fathers in Egypt, Jerome, Augustine of Hippo, Saint Paulinus of Nola (her cousin or cousin-in-law), and Evagrius of Pontus. She promoted the asceticism which she, as a follower of Origen, considered indispensable for salvation.

Melania, one of the wealthiest citizens of the empire, was married at fourteen, and moved from Spain with her husband to the suburbs of Rome. Her husband and two out of three sons had died by the time she was twenty-two. She became a Christian in Rome and, leaving her son with a guardian, set off to Alexandria, accompanied by her servants, to join other Christian ascetics to visit the monks at Nitria. When persecution broke out after the death of Bishop Athanasius in 373 and many of the monks were exiled to Diocaesaraea in Palestine, Melania followed and supported them financially. She built a convent in Jerusalem, and a monastery on the Mount of Olives for the monk and theologian Rufinus of Aquileia.

Around the year 400 she left for Rome to see her son. Due to her influence, her granddaughter, known as Melania the Younger would later take up the religious life. When the Visigoths marched on Rome in 410, Melania, her daughter-in law, Albina, and granddaughter Melania and her husband fled to Sicily. They then went to Jerusalem, where Malania died around 417. *

* The Lectionary, via Wikipedia, http://satucket.com/lectionary/Melania_elder.html