Join us today, Wednesday, June 1, 2022, today for Holy Eucharist at 12:10 p.m. to learn more about Justin, or check out the biographical information below.

Note: There will be no Zoom Evening Prayer & Video Study tonight. The clergy will all be at Holy Cross Episcopal Church in Shreveport for the Celebration of New Ministry and installation of The Rev’d Garrett Boyte as rector.

Remember also that this Sunday, June 5 is The Day of Pentecost: Whitsunday - Please wear red to church! 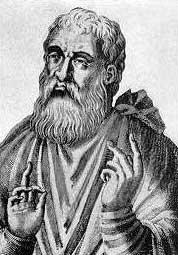 The Collect:O God, who has given your church wisdom and revealed to it deep and secret things: Grant that we, like your servant Justin and in union with his prayers, may find your Word an abiding refuge all the days of our lives; through Jesus Christ our Lord, who with you and the Holy Spirit lives and reigns, one God, in glory everlasting. Amen.

Toward the middle of the second century, there came into the young Christian community a seeker for the truth, whose wide interests, noble spirit, and able mind, greatly enriched it.

Justin was born into a Greek-speaking pagan family about the year 110 in Samaria, near Shechem. He was educated in Greek philosophy. Like Augustine after him, he was left restless by all this knowledge. During a walk along the beach at Ephesus, he fell in with a stranger, who told him about Christ. “Straightway a flame was kindled in my soul,” he writes, “and a love of the prophets and those who are friends of Christ possessed me.” He became a Christian as a result of this encounter, and thereafter regarded Christianity as the only “safe and profitable philosophy.”

About 150, Justin moved to Rome. As philosophers did in those days, he started a school—in this case, a school of Christian philosophy—and accepted students. He also wrote. Three of his works are known to us: a dialogue in Platonic style with a Jew named Trypho, and two “apologies.” (An apology in this sense, of course, is not an excuse, but a spirited defense.) Justin’s First and Second Apologies defend Christianity against the Greek charge of irrationality and the Roman charge of disloyalty to the empire. These two works provide us with important insights into developing theological ideas and liturgical practices of early Christianity. In the Dialogue with Trypho, Justin defends the Church against the Jewish charge of distorting the Old Testament. He interprets the Old Testament as the foreshadowing of the New.

While teaching in Rome, he engaged in a public debate with a philosopher of the Cynic school named Crescens, accusing him of ignorance and immorality. Angered, Crescens preferred legal charges against him. Justin and six of his students were arrested and brought before the prefect Rusticus. As the custom was, Rusticus gave them an opportunity to renounce their faith. All steadfastly refused to do so. Justin and his companions were put to death about the year 167. *