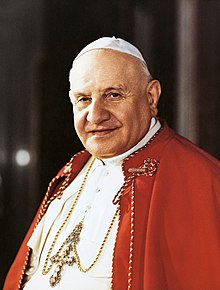 God of all truth and peace, who raised up your bishop John to be servant of the servants of God and bestowed on him wisdom to call for the work of renewing your church: Grant that, following his example, we may reach out to other Christians in the love of your Son, and labor throughout the nations of the world to kindle a desire for justice and peace; through Jesus Christ our Lord, who lives and reigns with you and the Holy Spirit, one God, now and for ever. Amen.

He called the Second Vatican Council (1962–1965) but did not live to see it to completion, dying on 3 June 1963, two months after the completion of his final encyclical, Pacem in Terris.

Following the death of Pope Pius XII in 1958, Roncalli, then Archbishop of Venice, was elected Pope, to his great surprise. After the long pontificate of Pope Pius XII, the cardinals chose a man who, it was presumed because of his advanced age, would be a short-term or "stop-gap" pope. Upon his election, Cardinal Roncalli chose John as his regnal name. This was the first time in over 500 years that this name had been chosen. John XXIII's personal warmth, good humor and kindness captured the world's affections in a way his predecessor, for all his learning, had failed to do.

Far from being a mere "stop gap" Pope, to great excitement John called an ecumenical council fewer than ninety years after the Vatican Council. From the Second Vatican Council came changes that reshaped the face of Catholicism: a comprehensively revised liturgy, a stronger emphasis on ecumenism, and a new approach to the world. *

* The Lectionary, via Wikipedia, http://www.satucket.com/lectionary/john_xxiii.htm