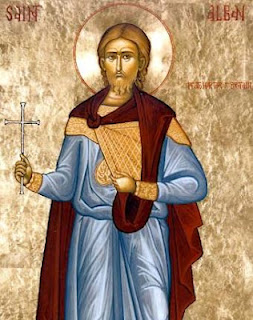 What a goof! When preparing June’s calendar for the newsletter, Father Whit left off an important date – especially for the life of our parish – St. Alban’s Day! The Church remembers Alban on June 22.  Alban is noted as “First Martyr of Britain.” If you need a little Alban refresher course, here is his biographical sketch from the Lesser Feasts and Fasts:

Alban is the earliest Christian in Britain who is known by name and, according to tradition, the first British martyr. He was a soldier in the Roman army stationed at Verulamium, a city about twenty miles northeast of London, now called St. Alban’s. He gave shelter to a Christian priest who was fleeing from persecution, and was converted by him. When officers came to Alban’s house, he dressed himself in the garments of the priest and gave himself up. Alban was tortured and martyred in place of the priest, on the hilltop where the Cathedral of St. Alban’s now stands. The traditional date of his martyrdom is 303 or 304, but recent studies suggest that the year was actually 209, during the persecution under the Emperor Septimius Severus.

The site of Alban’s martyrdom soon became a shrine. King Offa of Mercia established a monastery, there about the year 793, and in the high Middle Ages St. Alban’s ranked as the premier Abbey in England. The great Norman abbey church, begun in 1077, now serves as the cathedral of the diocese of St. Alban’s, established in 1877. It is the second longest church in England (Winchester Cathedral is the longest, by six feet), and it is built on higher ground than any other English cathedral. In a chapel east of the choir and high Altar, there are remains of the fourteenth century marble shrine of St. Alban.

The Venerable Bede gives this account of Alban’s trial: “When Alban was brought in, the judge happened to be standing before an altar, offering sacrifice to devils . . . ‘What is your family and race?’ demanded the judge. ‘How does my family concern you?’ replied Alban; ‘If you wish to know the truth about my religion, know that I am a Christian and am ready to do a Christian’s duty.’ ‘I demand to know your name,’ insisted the judge. ‘Tell me at once.’ ‘My parents named me Alban,’ he answered, ‘and I worship and adore the living and true God, who created all things.’ ”

The Collect for Alban:
Almighty God, by whose grace and power your holy martyr Alban triumphed over suffering and was faithful even to death: Grant us, who now remember him in thanksgiving, to be so faithful in our witness to you in this world, that we may receive with him the crown of life; through Jesus Christ our Lord, who lives and reigns with you and the Holy Spirit, one God, for ever and ever. Amen.