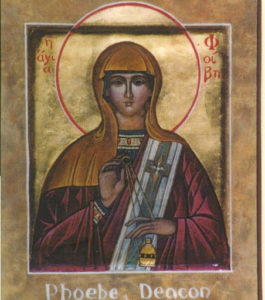 Eternal God, who raised up Phoebe as a deacon in your church and minister of your Gospel; Grant us that same grace that, assisted by her prayers and example, we too may take the Gospel to the ends of the earth; through Jesus Christ your Son our Lord who lives and reigns with you, in the unity of the Holy Spirit, one God, for ever and ever. Amen.

Phoebe (the name means "bright" or "radiant": Apollo and Diana, the god and goddess of the sun and moon respectively, were often referred to as "Phoebos" and "Phoebe"), was a DIAKONOS of the Church at Chenchreae, the eastern seaport of the city of Corinth. (Corinth was on a narrow isthmus that connected southern Greece (the Peleponessus) with northern Greece and the mainland of Europe. Attempts had been made to dig a canal through the isthmus in order to shorten shipping routes, but no attempt was successful till modern times. Accordingly many ships were simply dragged out of the water, put on rollers, and moved across the isthmus and into the water on the other side. Naturally, the crew got shore leave. Naturally, Corinth became famous as a port that accommodated sailors with shore leave. (This may account for the fact that Paul has a great deal more to say about sexual matters when writing to the Corinthians than he does in other connections.) When Paul mentions Phoebe, she has left the vicinity of Corinth and is in Rome, so that Paul commends her to the Church there. *