Almighty God, whose only-begotten Son led captivity captive: Multiply among us faithful witnesses like your servant Hannah More, who will fight for all who are oppressed or held in bondage; and bring us all, we pray, into the glorious liberty that you have promised to all your children; through Jesus Christ our Lord, who lives and reigns with you and the Holy Spirit, one God, for ever and ever. Amen. 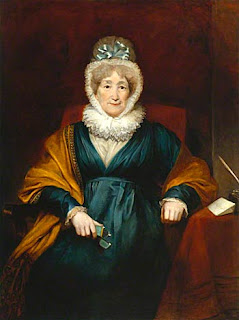 Hannah More (2 February 1745 – 7 September 1833) was an English religious writer and philanthropist, remembered as a poet and playwright in the circle of Johnson, Reynolds and Garrick, as a writer on moral and religious subjects, and as a practical philanthropist. Born in Bristol, she taught at a school established there by her father and began writing plays. Her plays and poetry became more evangelical and she joined a group campaigning against the slave trade. In the 1790s she wrote several Cheap Repository Tracts on moral, religious and political topics, for distribution to the literate poor.

Born in 1745 near Bristol, Hannah More was the fourth of five daughters of Jacob More (1700-1783), a schoolmaster. In 1758 Jacob established his own girls' boarding school in Bristol for the elder sisters, Mary and Elizabeth to run. Hannah More became a pupil when she was twelve years old, and taught at the school in her early adulthood.

Hannah More's first literary efforts were pastoral plays, written while she was teaching at the school and suitable for young ladies to act, the first being written in 1762 under the title of The Search after Happiness. By the mid-1780s over 10,000 copies of this had been sold. In 1767 More gave up her share in the school which freed her for literary pursuits, and in the winter of 1773–74 she went to London in the company of her sisters, Sarah and Martha – the first of many such trips she made at yearly intervals. In London, More attempted to associate herself with the literary elite, including Samuel Johnson, Joshua Reynolds and Edmund Burke.

In the 1780s Hannah More became a friend of James Oglethorpe, who had long been concerned with slavery as a moral issue. More published Sacred Dramas in 1782 and it rapidly ran through nineteen editions. These and the poems Bas-Bleu and Florio (1786) mark her gradual transition to more serious views of life. By this point she was intimate with William Wilberforce and Zachary Macaulay, with whose evangelical views she was in sympathy. She published a poem on Slavery in 1788, and was drawn into the group of prominent campaigners against the slave trade such as Wilberforce.

In the late 1780s, Hannah and Martha More did philanthropic work in the Mendip area, following encouragement by Wilberforce, who saw the poor conditions of the local people when he visited Cheddar in 1789. She was instrumental in setting up twelve schools by 1800, where reading, the Bible and the catechism were taught to local children. More also donated money to Bishop Philander Chase for the founding of Kenyon College, and a portrait of her hangs there in Peirce Hall.

The More sisters met with a good deal of opposition in their works: the farmers thought that education, even to the limited extent of learning to read, would be fatal to agriculture, and the clergy, whose neglect she was making good, accused her of Methodist tendencies. In her old age, philanthropists from all parts made pilgrimages to see the bright and amiable old lady, and she retained all her faculties until within two years of her death. *

* The Lectionary, via Wikipedia
Posted by Whit+ at 7:24 AM